Nothing clears the mind like a long road-trip, preferably on a two-lane highway somewhere out West. Don’t plan, just go. Rushing yellow lines, endless horizons and the constant sensation of speed. It’s a total lack of commitment — your feet don’t hit the ground and you’re not sure where you’ll spend the night.

Part of the palliative effect is exhaustion. Driving for 12 hours is a long day. But because you’re trapped in the capsule of a car, without being able to fuss with work, errands or nagging tasks (lose the cellphone), eventually that low buzz of latent stress will start to unravel. At some point the anxiety becomes clear — its source sits right there in front of you on the highway. And you can’t wriggle away from it.

If you’re road-tripping with someone, at some point you’ll stop talking. By day three there’s not much more to say, no matter who’s next to you. And that’s not a bad thing. Just shut up and enjoy the scenery.

And make sure you really get lost. Like the Flying Dutchman or Ryder P. Moses from John Sayles’ brilliant “I-80 Nebraska” short story, you should haul ass on the edge. A few transmissions are okay, like postcards from random ports of call. But to truly disconnect, people shouldn’t know where you are.

Sure, a road-trip might not be such a novelty if you spend an hour per day in your whip commuting to work. I don’t even own a car. So there’s that. But I’m not the only one who digs The Road. Kerouac, Chevy Chase, Hunter S. Thompson, Jim Morrison and Jack London know what I’m saying about this All-American escape. Just get out there and hit the cruise control. 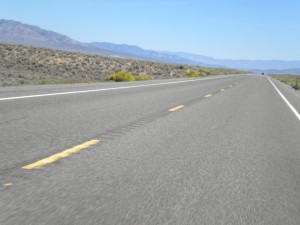 Yesterday I ticked off the final 800 miles of a 4,500-mile cross country drive. My wife and I moved a buddy’s car from SF to DC, the long way. We drove 40 miles in the wrong direction one night. I was in charge of the map at that point.

Besides decompressing far better than we could’ve on a beach, I learned a few things about the U.S. of A. For one: There are lots of rocks in this country. And business is booming in Dickinson, North Dakota. You can get a hell of a steak there, even late on a Wednesday night. And the gang of guys at the next table probably works for Halliburton.

North Dakota is loaded now that its oil is economically-recoverable. I asked someone in Dickinson where the oil fields were. She looked at me like I was an idiot, then pointed in all four directions.

And it’s not just Dickinson. Fargo is hopping. Great old bars, decked out in original neon. Check out North Dakota, for real.

We also learned how much completely open space you can find in this country, sometimes without fences. Out of Baxter, Nevada, just across the state line into Utah, we stopped on a deserted state road. In the road, actually. No cars were coming, for hours, and the silence was seriously deafening.

It felt illicit to stand in the middle of the highway. (Maybe it was, technically.) But the lack of humanity was thrilling, even a little disturbing. And when the sun goes down out there on the perimeter, it’s a different planet. Milky Way, satellites, shooting stars — all that shit.

With our trek over, I’m hoping I can hold onto the Zen of the road, for a while at least. It’s worked for me before. Back in ‘98, when I was “between jobs,” a buddy and I sublet our apartments and took off for a few months. We got back 12,500 miles later, after much stupidity. Our car broke down twice, and got smashed into and cleaned out by junkies in Vancouver. We worked as dishwashers at a traveling gin-tasting party in SF, spent a night out in the dunes of White Sands, an active missile range, and sunk our car up to the doors in sand on a Bayou island.

So that trip was far more Bohemian, and risky. But hey, I was 24. In my mid-30s, those antics don’t sound like fun. But the perspective of the road is the same at both ages. Untangling mental knots is good for what ales you, as is sampling the profusion of craft brews in every town these days. Hitting random bars in towns you’ve never heard of builds perspective. It’s a big world. Nobody cares about the B.S. you’re sweating at home. Maybe you shouldn’t either?

One response to “Just Drive”