I could hear the airboat before I saw it; the thrum of the fan propeller grew louder as it approached and finally came into view. It’s driver, a sallow-faced Korean man, was wearing a bright yellow poncho and camo waders; he expertly steered the boat parallel to the dock on which I was standing and hooked a rope onto a mooring. The gasoline engine grumbled as the twin propellers spun to a stop. I handed the pilot a wad of cash–which he stowed in a safety-orange toolbox behind the driver seat–and stepped onto the undulating boat. As I took a seat I placed the plastic-handled crate I was carrying on the empty seat beside me.

The pilot shrugged and started the engine removing the loop of rope from the mooring before returning to his seat to control the drifting vessel. I yelled directions toward him as best as I could manage but the roar of the engine soon made conversation impossible and I had to assume, by his silent nods, he knew where he was going. As he navigated the broad bends of the Charles river I sat back in the hard plastic seat and tried to relax. The stream bed widened gradually until I lost sight of river banks entirely. I didn’t realize we had left the river until we passed the 2nd story windows of a house almost entirely submerged in water.

Soon the pilot was navigating the airboat street by street, when we came to a four-way intersection I could almost reach out and touch the stoplight suspended by wires above us. The crew of an Army National Guard boat watched us pass warily but didn’t stop us, we must not have looked like looters. When I began to recognize the neighborhood where I used to live my chest grew tight and I blinked back tears. The water was lower here and I was able to direct by pointing to street signs jutting out of the murky water.

When we turned onto my street I nearly missed the two-level apartment building we called home. The water was lapping only about a foot above the stoop of the front door but the waterline reached over the door handle. Holding the plastic crate over my head I waded toward the house, nearly chest deep in water, and climbed the brick and mortar front steps to the door. 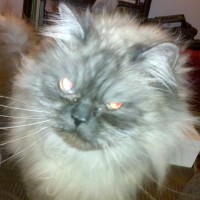 When I entered the 2nd floor apartment I dropped the box and began searching room to room clicking my tongue against the roof of my mouth. When I entered the bedroom I dropped on my belly, reached under the bed, and pulled out a tangled mess of fur meowing in protest. The Himalayan’s nose was dry from dehydration so I filled his bowl from a water bottle I had brought and then took a look around while he greedily lapped it up.

In the living room alone there were my wife’s collection of books I have moved more times than I’d choose to count, black nylon books of CDs and computer software neatly alphabetized, my stereo equipment including a phonograph player we’d barely used, and our flat screen TV resting on a cabinet stuffed full of console systems, cables, and DVDs, some still in their overwrap. In the bedroom I knew exactly where my sandalwood box of memorabilia was; our digital camera, and my wife’s iPod I’d have to search for. My guitars hung from wall-hooks about the apartment, I haven’t had much time to play them recently. Filed away somewhere was a folder of song lyrics and guitar tab: songs I no longer remember. I lingered for a time in the dining room in front of a photo collage before remembering I had digital copies of all the pictures online.

When I returned to get him, my cat was cleaning himself in front of the empty water bowl. I scooped him up, unceremoniously plopped him in his crate, and turned to go.

Filed under: If, Then. by McKnight
4 Comments »