I met Wayne Brown the first day of my graduate program.  As someone who doesn’t like “first days” or meeting new people or being in a room full of groups of people even if they aren’t new,  I was slightly overspent.  The only thing I knew about Wayne was that he lived in Jamaica and our director thought highly of him.  I had read one story of his—something about American children trick-or-treating—which I remember liking, but not really understanding.  (I probably didn’t even fully read it!)  Of course, I had no idea that Wayne would be a major influence on me, on both my life and my writing.  As a mentee, you don’t entertain those sorts of notions.  You hope for the best but expect the worst.  At least, I did.

“You should be writing fiction,” he bellowed, a few seconds after I showed up for our first conference.

Shut the fuck up, I thought.

He had taken me off guard; he clearly didn’t know that apathy was the best way to motivate me.  I became quasi-mute, mumbling incoherent answers that somehow got me into bringing him the one and only story I’d ever written.  Secretly, I was very proud of this story.  Outwardly, I was mortified that anyone was reading it.  I had called it “Grief,” something I knew almost as little about as writing fiction.

There are many moments with Wayne that stick in my mind—sailing to Lime Cay, twice; him defending me, when I used the word flip-flop as a verb; countless requests for nicotine gum; getting picked up from the airport and being reprimanded for bringing rain to an island where it never rained.  (There are also things that make me think of Wayne that are only tangentially related: Appleton Rum & Cranberry; my father; the word myriad.)  But the memory of his first quip to me is one I may never move past.

Later that day, after meeting with him, I hid in an empty room, and took a nap—my usual response to any sort of conflict.  I had a strange dream that I no longer remember the details of; only that I woke up even more upset.  On the way down to the bathroom, I slipped on the stairs, nearly breaking my leg.  Finally, I cried.  The day had broken me.

I called a close friend, a fellow writer, who I trusted.  “Am I crazy? Who is this guy? What should I do?”

“Don’t trust your instincts,” he told me.  “When it comes to men, you’re usually wrong.”

I’ve often said that Wayne didn’t instruct on writing; he instructed on life.  He was, in fact, a lifeforce.  Something to be reckoned with, if you will.  I spent a lot of time contemplating my academic career that night, but the next day, when Wayne told me he knew I was a fiction writer “from the first line” of my story, the choice was no longer just about school.  Either I was who he belived me to be, or I acted like I was until the day it became true.  Verisimilitude was Wayne’s favorite weapon.

That was the meanest Wayne ever was to me, not counting the time I asked for it by yelling at him on the stairs of his own home.  From that first meeting on, Wayne was supportive of my writing to a fault, and I witnessed his belief in other students, as well.  When his support came each month—in the form of line-by-line coagulating of whatever drops of prose I had bled out and mailed to him—I behaved as though someone had ripped each of my fingernails off one by one.  Somehow I still learned from him, even when I refused to listen.

To no one’s surprise, I remained too strong-willed for my own good throughout my MFA program; but I did manage to finish a story that I’d started under Wayne’s tutelage my first semester.  All I’d sent to him originally was a very raw brainstorm—a weak plot buried beneath an obvious and sentimental characterization.  To Wayne’s credit, he took the submission seriously—later mentors would’ve yelled “bullshit” in a heartbeat—and the questions he sent back to me were clearly a challenge.  What about switching the point of view?  Doesn’t the man get to tell his side of the story? Have you decided exactly what’s wrong with this woman? What else is going to happen, besides a baby being neglected?  Is this a story, or just a diary entry? In other words, I needed to take myself seriously.  This made me furious, and I angrily stabbed a sentence into the flesh of my diary that became, and remained, my inspirational opening line.

Two years later, I locked myself in a hotel room and wrote a story worthy of that first sentence.  A recent workshop had provided me with a dozen scenes that needed to be fleshed out, and I’m more than proud of the one weekend in my writing life that could be called productive.  Still, I attribute the completion of that story to Wayne’s original faith in it.  If he hadn’t outwitted my stubbornness, laziness and lack of self-confidence, then I never would’ve believed it could be done.  Ironically, I don’t think he really knew how hard I was resisting him.  He was just being Wayne: instructing, postulating, expecting greatness.

Today, Wayne is gone.  And I’ve let my will to write fiction dissipate, too, at least for the time being.  However, Wayne’s instrumental willpower lives on through my teaching style; though, I admit to learning that lesson the stubborn way, too.  I approached my first semester thinking I could be a friend to my students, which would inspire them to be productive and successful.  (Surprisingly, this didn’t work.)  Since then, I’ve adopted the no-nonsense approach.  By the end of the first class, my students understand that I expect perfection, and I’m sure they feel completely uncertain of their capabilities—just as I did, only a few years ago.  Undoubtedly, the majority of them leave the class thinking I’m a lunatic, if not a brute.  As a result, some don’t come back; but, those who have the smallest amount of faith in themselves return the next time, and the next time, and the time after that.  Most make it through to the semester’s end.  As they go about doing the dirty work—learning how to be an adult, and figuring out how to trust themselves—I get to spend the rest of the semester watching them grow up, and believing they will succeed.

Dedicated to Wayne: I miss you. 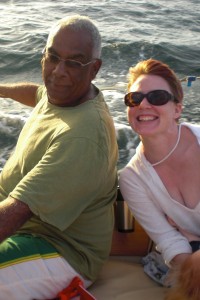 Filed under: If, Then. by llxtm
4 Comments »