Refuse Abuse of Refuse, or A Modest Proposal to End Litter

Littering: what bullshit. Who does this? What rational being, upon finding unwanted items in his hands, decides to drop them on the ground, or throw them out a window, or leave them on a public table? What sequence of thoughts leads one to the conclusion that this is at all okay, even once?

Actually, this is too much credit. My guess is that there’s no thought at all, just a case of classic disregard for anything not directly affecting them at that moment, or out of sight, out of mind. But it’s not out of sight, is it? Litter is pervasive. There’s no archvillain, The Trashman or The Ripe Stinker or Moldy Poldy, gaily tossing refuse about in an affront to nature’s beauty and the dignity of modern humans. There’s only modern humans. We no longer use leeches medicinally or burn witches or bind the feet of young women. Why do some of us litter?

Nay—why do some of you litter? I cannot include myself in your genetics. Serial killers, bad dancers,  fans of Extreme Makeover, and those with chronic halitosis, sure, I accept my fate with you as fellow humans. But litterbugs? Adjoined chromosomally with stink beetles at best.

For anyone with me (i.e., for those of you who walk upright, qualify for mammal status, and have the slightest semblance of a soul), a few suggestions. First, let’s retract the term “litterbug” from the lexicon. Is there a more unassuming criminal label that this? If I didn’t know the meaning, I’d probably want to hang out with a litterbug—seems like he may give me free cigars and break out into jubilant dance at any moment. For alternate terms, I offer up junkers, smellies, tossers, or (thank you Monty Python) miserable fat littering bastards.

Second, let’s bring back the Crying Indian (sic). Everyone remembers Iron Eyes Cody, shedding a tear for the bag of trash thrown at his feet after canoeing by a nuclear power plant for some reason. Not until the classic 1980s “I learned from watching you” drug ad did television capture so much of our consciousness. Mr. Cody, your work is not done. On a recent walk I came across five pieces of gum, some tissues, a Funyuns bag, two condoms, three beer cans, and a shirt. A shirt! We need you, sir. 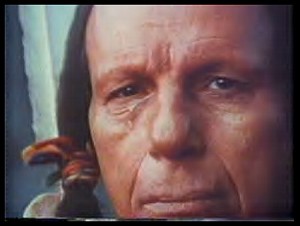 "I can't believe I just stepped in a discarded diaper."

Third, let’s put some resources into this. Make me Rubbish Czar, give me 1/100th the budget from the War on Drugs and 1/1,000,000,000,000th the budget from the War on War, and watch me make a difference. The warning signs along a highway and the “Put Litter in Its Place” text on McDonald’s cups aren’t cutting it (in fact, the latter warning always bothered me–isn’t litter’s place on the ground?). I need some highway cameras, some automated spy drones, several fighter jets on loan from the War on War, and some inmate work details—not to pick up trash, but to beat the crap out of any offenders. My Work for Release program will yield incredible results, I’m sure of it.

Finally, let’s update the law. One-third of those in jail are drug users. One-third!  (Incidentally, I’ll be selecting from the other two-thirds for my prison whoop-ass program—I want real criminals to help me, not kids who made bad decisions or pathetic addicts). Actually, that was just editorializing on my part, as my law suggestions have nothing to do with jail time. Instead: 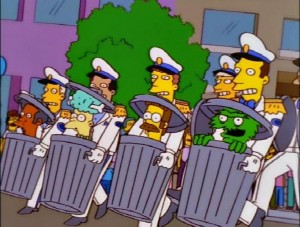 “As your Rubbish Czar, I will stop at nothing to clean up our community.”

But I can’t do this alone. So please, hear me as I call upon all patriots to call your Congressmen, Congresswomen, and CongressUndecidedOnGender and insist upon these changes. Leave your teabagging and your Obamism aside for a day and fight for something that really matters: your right to go for a walk without stepping in something schlocky.

17 responses to “Refuse Abuse of Refuse, or A Modest Proposal to End Litter”