Your Tax Dollars at Work

This time of year, during workdays in my hermetically-sealed cube farm, I often get a nostalgic whiff of diesel and rotting garbage.

It’s the call of the city road crew where I worked for summers during high school and college. Other kids had internships, but I hadn’t accepted the idea of shuffling papers for a living, yet. And I loved working for the city.

Tuesdays were the best. Two summer workers would get picked to hang off the back of a trash packer for a long day of slinging cans in a network of alleys in the Rustbelt suburb. Arriving at 7am, usually hungover, we’d say we didn’t want to see our names next to the words “alley trash” on the list of the day’s assignments. But that wasn’t true. For one thing, the best stories came from working trash.

And it was badass. I wore army pants, a t-shirt with the sleeves rolled up, work gloves, an orange vest and ball-cap–on backwards, of course. The city crew was great for your arms, which got ripped from handling jackhammers and shoveling asphalt. But nothing was a better workout than a day of throwing thousands of water-logged and maggot-infested trash cans.

I vividly remember being on the back of the packer one morning with a friend, Gene. We were on the city’s main drag, sitting at a red light. There was a cute girl sitting in a nearby car. We stared at her while she pretended not to notice us. But she did. We were 19-years-old and life was good.

But why? We never made more than $6.50 an hour working for the city. The full-timers, some of whom still work there, would laugh at how my buddies and I idealize that job from long ago. They get in those trucks every weekday, all year, every year. Being an office drone is a far easier life than being a trashman.

As fun as it was knowing secrets about every house, that wasn’t the job’s real appeal. Working trash was pure. As absurd as it sounds, I’ve never felt the same invigorating clarity I did bouncing around on the back of a trash truck, a few feet away from fetid water and tons of garbage.

With the wind in my face, I’d hang onto a steel bar, my arm tensing as we’d whip around a corner at the base of a four-block alley. I’d see a nearly endless string of cans, and would drop down from the truck and get to it–tugging, lifting and tossing their contents into the packer. The only break between the hours of exertion would be to run the hydraulic crusher every 20 minutes or so–a hand nonchalantly in front of my face to keep shattering glass and mystery liquid from getting in my eyes.

My fellow slingers and I wouldn’t talk, or even think. Alpha waves, a burn in my legs and arms, and putrid smells were the only sensations. Sometimes one of us would yell a heads-up that we were about to fling a maggot-covered bag into the back of the packer.

And the day would pass. As a 60-year-old veteran trashman once told me, a Bud never tasted better than it did after eight hours on the packer. And sleep was a coma. Total peace.

It wasn’t all work. One day Gene and I decided to have a few beers at lunch. We’d already had a couple, and decided to close out with one on the beer bong before heading back to the alleys. Mine went down without incident. But Gene’s, a double, was a misfire. The tube popped out of the funnel and 24 ounces doused his face and shirt. We had five minutes until we had to clock back in at the base.

The knob on Gene’s life was always turned up to 11. He grew up fighting for his lunch with too many older brothers to count. He was famous for the flair he brought to center-field during high school baseball, most notably the scream he employed to taunt batters. It was a deafening inhale, which could be heard blocks away.

After the spill he ran into the bathroom of our friend’s house, which his sister had commandeered. Gene came out reeking of beer and perfume: His solution had been to pour an entire bottle of a fine fragrance from Spencer Gift’s all over himself.

It was 90-plus degrees that afternoon. We climbed onto the back of the truck back at HQ. An assistant city manager walked by before we pulled out. He sniffed the air, and looked at Gene, who was visibly soaked. Although he stopped and stared, he didn’t want to know, and didn’t ask.

Another day I got a plumb assignment–tree trimming in a retired fire truck. The boss even let me pick my crew. We both knew I wouldn’t do anything all day. So I asked if I could pick an old friend, Kurt.

Like me, he was a college kid. But this was a rough patch for him. A meltdown, actually. He was in a deep rut after a break-up. And it looked like he might get thrown out of college because some jackass copied from his final for an engineering class.

Kurt rarely showed up on the morning list at the city. If he did, it was for something awful like cutting open a thousand bags of cut grass, picking through bulk trash while avoiding road kill or painting a chain-link fence on the side of a busy street.

I rolled my ‘60s-era rig a mile or over to the satellite dump where Kurt worked. He was assigned down there with Gene and six or so full-timers. They spent their ample free-time arguing about whether a gorilla could kick an alligator’s ass. One of the guys had some experience with animal combat, having once wrestled a bear.

But by the time I got down to the base, at about 7:30am, Kurt was gone. I walked into a supervisor’s office where I’d once seen the low-level boss doing lines of blow. When I asked where Kurt was, he said: “Don’t know. That little motherfucker disappears quick when he’s not on the list. You’ll never find him.”

I took it as a challenge. The yard around the base was sprawling, and totally wild. Weeds enveloped hangers of rusting machinery. Nearby, a tub grinder noisily converted brush into mulch, filling the air with dust and the occasional dislodged blade. There was a big dump used to store bulk waste, a pumphouse for city water, and fenced in lots of old trucks, snow plows, and piles of scrap metal.

There were countless places to hide. I had almost given up traipsing around and calling Kurt’s name when I stumbled into an open space in the back of one the old hangers. Hidden among the hulks of metal were two lounge chairs, pilfered no doubt from the bulk trash landing. Nearby was a TV set, microwave, oscillating fan and a pile of vintage Playboys, but no Kurt.

An hour or two later, I’d looked almost everywhere. There was one last spot, and it was a long-shot. The city stockpiled a massive amount of road salt. To keep it from washing away, they pushed the stuff into 40-foot tall mound under a huge storage shed with three walls.

I scampered around to the back of the pile and found an extension cord running up the salt mountain. When I climbed up, I saw Kurt asleep on a mattress, nestled into a hollow he’d dug at the pinnacle. A boom box was next to him, with some classic rock playing at a low hum, and a Playboy on his chest.

Earlier this year, Kurt emailed me and Gene a listing from a government auction. I opened the link and saw one of the trash packers from our time at the city. The 1989 GMC Loadmaster refuse packer, which sported an 18-cubic yard capacity, eventually sold for $3,200. 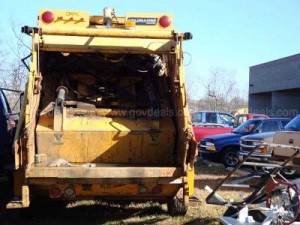 We joked about buying it and starting our own service department. It was a nice fantasy for a few days. But I kept the picture of the packer, which looks ancient.

Sometimes, at my office gig, I’ll take a break from staring at the computer screen to look at an electronic picture frame. Cued up is a picture I snapped of one of those alleys in my home town. It’s the longest one from our trash circuit, which stretches off into the haze of my Midwestern past.

Filed under: "Out of the Office" by Pual
2 Comments »

2 responses to “Your Tax Dollars at Work”