This is Kim Roth’s first guest post on 30POV. The speech below was written for and performed at an advent service this past December.

This is the irrational season,
when love blooms bright and wild,
had Mary been filled with reason,
there’d have been no room for the child.
~ Madeleine L’Engle

I’ve never been quite sure what to do with Mary.

Growing up wedged between Catholicism and Agnosticism, I didn’t know whether to believe she was a myth, or the conjoined twin of the Holy Trinity.

Honestly, I never gave her much thought, because when I finally decided to follow Christ, I was in a church where you only talk about Mary at Christmas time, and then only to prove that she was a literal historical person who listened to God, didn’t sleep around before marriage, and served as a birthing vessel for Jesus so he could die on the cross for our sins.

There seemed to be this assumption that, just because I could read it in the Bible, written in black-and-white, the facts would speak for themselves and everything would make sense. But it couldn’t be that simple. I mean, Word became flesh and walked among us, and we didn’t recognize Him. And yet, we often insist that because Word became written word, the mystery should be comprehensible.

Madeleine also taught me about icons, like the paintings of Mary on the slides, how they are symbols representing the quality of a person or an event, and how, while we often think only of pictures as being icons, that words can also represent a bigger mystery.

When we read the genealogy of Jesus, the list of names means nothing to us unless we are familiar with the stories behind them:

* Tamar – childless widow given in marriage to her deceased husband’s brother; new husband wouldn’t have sex with her, so God killed him; nobody wanted to marry her after that, so she disguised herself as a prostitute, went the seduction route and finally got a child.

* Rahab – actually WAS a prostitute, helped out Israeli spies by hiding them & lying about their whereabouts; eventually married up, had a child & was commended for her faith.

* Ruth – widow of a Jew, BUT she was foreigner; crawled in bed with an older, wealthy in-law to make it clear that she was available, thus ensuring that she and her also-widowed mother-in-law would be provided for.

* Bathsheba – had an adulterous affair with King David after he watched her bathing naked on her rooftop; David found out she was pregnant & had her husband killed; God punished them by killing said child, but she later gave birth to King Solomon.

That’s just the women in the line-up.

So, story opens up the big picture – it turns a list of names into an epic adventure of good and evil and grace and forgiveness. It reminds us of the sacredness in the profane, and the profanity of the sacred.

And now we come to Mary.

My cousin is expecting her first child on Christmas day, and she posted a Facebook status:

Katie doesn’t understand why people keep telling her to get her sleep now – because she won’t get any when the baby comes. Do they not remember what it’s like to attempt sleep at 8 ½ months pregnant?

And I thought about Mary, not only trying to SLEEP at such a late stage of pregnancy, but to WALK for a week or so from Nazareth to Bethlehem, only to be told there were no beds available in the town.
I sent a survey out to several of my friends, all with unique stories of pregnancy and birth, to get a better feel for the experience of motherhood. And as I listened to their stories, I realized the story of Mary came down to two fundamental elements: joy and pain.
Think about it – When have you experienced moments of joy that were shared with pain?
I still remember the tears I shed graduating from college – so happy to have my hard earned degree, but completely anxious and terribly sad about leaving the community of friends I had lived with for the last four years.
Watching some of the Hog games this season, I would imagine there is significant pain and joy involved when you make a beautiful first down, as your knee bends awkwardly beneath you and a pile of sweaty men jump on top of it.
And, obviously, there is the joy – and the pain – of giving birth to another life.
The joy – and the anxiousness – of having responsibility for another life.
I looked at Mary, and I recognized that her story balances in the midst of the joy of the Creation narrative and the painful sacrifice embodied in the crucifixion.
I thought about her joy, and her pain, and I realized I didn’t have the words to express Mary’s significance.
I didn’t have the words unless they were iconic words.
Words that painted a picture of an epic truth beyond themselves.

Filed under: Awakenings by barefootbohemian
5 Comments » 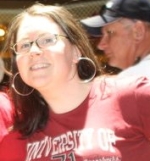 Southern, single & 35, Kimberly Roth should by all intents and purposes be a nun, but has chosen instead to pursue rabble-rousing. Arkansas born and raised, her viewpoint springs from living as a faithful heretic in the midst of the Bible belt. As her patron saint, Madeleine L’Engle, once wrote: “If my religion is true, it will stand up to all my questioning.” There are a few beliefs she is dogmatic about: love, grace, hospitality, community, listening & resting. The rest she’s still figuring out.