To emerge. To spread my wings to the sun. To fly.

As I lay on the table, watching my sister begin to shape the tattoo to the extreme topographical challenge that is my left leg, I basked in what was to come.
I had no idea that the change would be as profound as it is.
Let’s back up a little bit.
I don’t dwell on the fact that I was hit by a car, some years back.  I don’t bank on it, and I certainly don’t hide from it.  It simply is, what it is.
There are people in my life that have no idea about the extent of my scars, and really.  Why would they?
I make a point of wearing long skirts.  Knee socks.  Pants.
Makes the summers a little toastier then they need to be, but what price, peace of mind?
I’ve had that scar for over 15 years now.  You’d think I’d be more used to it.  To people’s reactions to it.
The quick intake of breath.  The wince.
I’m not.
I know it doesn’t look like anyone’s idea of normal.  I’ve waxed poetic about this particular subject before, but it never truly conveys what it feels like.
The thing is, because it’s become second nature to me to cover them, I don’t really think about them.  That’s why when I occasionally get caught out by surprise, it’s an unpleasant shock.  Sharply focusing me once more so that I have to think about those parts of myself.  The mental amputation having phantom pains once more.  Unpleasant to the extreme.
This past year was one of profound change for me.  I agreed to take part in a documentary about scars, even as I was making arrangements to get one of the largest tattooed by my sister.
The documentary was extremely hard on me, emotionally.  Questions were asked, and because they wanted a candid, true reaction to those questions, I wasn’t allowed to read or hear them before I was asked them on camera.  The word inspirational was bandied around.
Now, I don’t really see what’s inspirational about having scars.  The ability to live with them?  I didn’t really see that as a choice.  Still don’t.  Much like the physiotherapy, the rehabilitation, and the endurance of surgery, it was merely something I had to endure.
As a result, I know more about the nature of pain then most people.  Pain is transient.  It never stays at the same perceived level for very long.  If you can endure 5 seconds, you can endure a minute, and so on.
You can endure a lot more then you think, when pressed.
Due to unfortunate, and unforeseen, and horrific events, my sister was unable to start my tattoo this summer, and it also cut short a sorely needed visit with her.  It’d been far too long since she and I were able to hang out and just do stuff.
When I checked the airline prices, I was pleasantly surprised to find that I’d be able to pull a long weekend visit with her, and still be able to afford to feed the family.
De.  Lightful.
Arrangements were made, and flights were booked.
It was so good to see her at the airport.
I got to spend time with her in her studio, watching her professionally was a treat.  She’s focused, and I enjoy watching people who are skilled at what they do.  Skilled she is.
I never saw a picture of my tattoo to be.  I gave her some thoughts, and left it entirely in her hands.
She sketched directly on my leg, sure strokes.  When she paused to ready her needles and inks, and to prep the area, I hopped off the table, and took a look in the full length mirror in the corner of her working area.
It took my breath away.
Nothing will ever make my leg pass for normal, but…
The transformation was amazing.
I didn’t see the scar.  It wasn’t the lines covering it, but the way they flowed and reshaped somehow the irregular and outlandish contours I expected to see.
Incredible.
I didn’t cry.
Not then.
The first few strokes were both more and less painful then I thought they’d be, as she passed over the portions of my leg that have no nerves, and the hypersensitive areas that were loudly telling me what a bad idea this was.
5 seconds.
I could stand 5 seconds.
Which meant I could stand a minute.
3 hours later, she was ready to start with shading.
I hadn’t realized just where she wanted to shade.
My ankle.
The hub of what sensations remain in my leg.
She told me to let her know if I couldn’t take it, and began.
5 seconds.
Intense pain.
Every second that passed was another eternity.
Random muscular twitches were fought by flexing one arm at a time.  The other leg.  A finger.
Sweat poured down my back.
I popped yet another sugary treat into my mouth to stave off the shock I felt wavering at me.
Every moment that passed brought me closer to my goal.
5 seconds passed..for 2 and a half more hours.
When I looked down, I didn’t recognize it.  Which was wonderful.  Is, wonderful.
I can never repay my sister for the feeling of being able to wear skirts that don’t come all the ways to my ankle.
That first day I was healed enough to wear a skirt, someone glanced over at me, and I froze.
They cocked their head to the side, and for a long minute, I couldn’t figure out what it was they were doing.
Then I realized.  He was just trying to puzzle out which way the tentacles go.
I got off at my stop, went home, and then.
Then, I cried.
I take every opportunity to show off Inky, and that’s something that I never thought would happen for me. 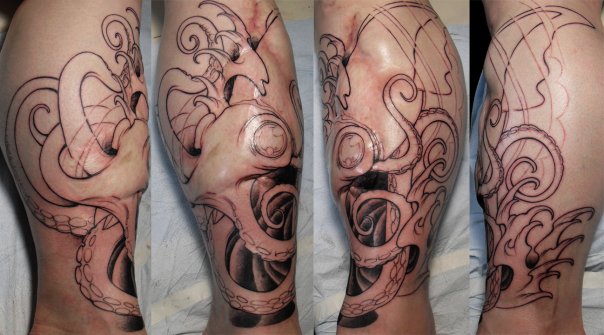 The pain and shame I once felt when people looked at my leg is rapidly eroding, being replaced by pride at being the recipient of my sister’s talents.

Filed under: Awakenings, Most Popular Posts by labtechgoddess
14 Comments »

14 responses to “To emerge. To spread my wings to the sun. To fly.”