History Lesson < 500 Words "The Awakening of Constantine I" 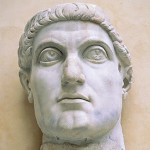 I am embracing my historian side and have decided to devote this blog to the emperor Constantine I, without whom, Christianity might not be what it is today (good or bad).  As an atheist, I find it fascinating to discover the ways in which various religions have spread.
Who was Constantine I?
Constantine was first co-emperor, and then sole emperor, of the Roman world from 306 C.E. to 337 C.E. during what is thought to be the empire’s transformation from the Roman Empire into the Byzantine Empire.
What was his Awakening?
In 312 C.E., Constantine was at war with his co-emperor (of sorts) and nemesis, Maxentius, who had control of Rome.  The decisive point in his war with Maxentius was the Battle of Milvian Bridge, in which Constantine believed he saw the symbol of a cross in the sky and the words “victory through this” (or something similar) written beneath it.  He would go on to win the battle, and would credit his victory to Christ because of the symbol that he saw.
What was his effect on Christianity?
Edict of Milan – After his defeat of Maxentius, Constantine met with another co-emperor, Licinius.  Together they published a document that provided religious toleration for everyone, including Christians.
Council of Nicaea, 325 – As Christianity became more popular, certain issues surrounding it had to be decided.  Constantine presided over the first ecumenical council in 325.  This council discussed the essence of Christ, and found that Christ was equally God with the Father and the Holy Ghost (as compared to the Arian belief that Christ was made by God).  Additionally, the council determined the date of Easter, and created the twenty canons for the governing of the church.
Churches – Constantine built several basilicas during his reign.  Basilicas were used mainly for governmental and imperial purposes, but Constantine transformed them into churches.  These rectangular buildings would serve as the standard for most Christian churches from that point forward.
The Death of Constantine I

Towards the end of his life, Constantine suffered many failures.  He began to question whether the decision made at the Council of Nicaea was correct, and his beliefs moved towards Arianism.  In 337 C.E. he fell ill, and on his deathbed was baptized by bishop Eusebious of Nicomedia.  He was buried in the church of the Holy Apostles.
Conclusion
Only one pagan emperor existed after Constantine.  Christianity became the state religion, and eventually divides would occur between papal and orthodox Christianity.  The Roman Empire was extremely powerful and influential, and Constantine’s acceptance served as a catalyst for Christianity in the ancient world.
Source:  A History of Byzantium, Timothy E. Gregory.

Filed under: Awakenings by Christina
5 Comments »