So, here I sit, on the eve of my fortieth birthday. At 10:16 a.m. tomorrow morning I will have passed forty-one years alive on this planet and this occasion is cause for some reflection. I thought, perhaps, that I might write about spiritual enlightenment but that seemed cliché. So, then I thought maybe I should write about the Enlightenment and the awakening of reason and intellect or spiritual mysticism and religion, the advent of mankind as important unto itself not just in relationship to some deity. Perhaps talk of Voltaire, Rousseau, Locke and Diderot and their collective social and intellectual impact but I have decided to do none of the above. As I sit here, three drinks deep I have decided to tell a story. It is a long and convoluted story about one man’s journey through this world but I will abridge it to meet needs of the medium and the limited attention span of our generation.

The year is 1969 and three young men have just robbed a Credit Union in Marblehead, MA and taken off with a small amount of cash. They then drove to a wooded section of town to divide up the spoils and one young man is shot when a disagreement over the split arises. There truly is no honor among thieves. The injured man managed to drive himself home to his apartment in Beverly where his wife and two young children awaited. In a panic his wife takes him to the hospital in blood soaked clothes in the ruined backseat of their only car. The local hospital followed protocol and notified the police of the gunshot victim and they quickly arrived and arrested the patient for the robbery two towns away. A few months later the twenty-one year old wife and mother had another child, a little boy. Less than a year later she was dead the victim of a hit and run accident. The would-be bank robber, and father of the children, was subsequently convicted to fifteen years in prison leaving the children without either parent.

Each child was taken in by a relative, on their mother’s side of the family, where they were raised as a member of that family. The eldest was a boy who went to live with an aunt and her husband and four children where he played the male version of Cinderella. The second child was a girl who stayed with her alcoholic grandmother and became a sibling to her aunts and uncles and the third child, the infant boy went to live with another aunt in a nearby town. Although the three near-orphans never lived together growing up they always knew the score and stayed close through family events.

The youngest child was raised in a loving family where he was made to feel every bit a part of his “adopted” family. This boy, who carried the name of his convicted father, David grew into a young man and like so many young men started questioning the vagaries of life and the beliefs of a bygone era. He read the Bible as a lad and decided that is didn’t make sense to him and insulted his intellect and so decided to become an atheist. Not yet satisfied that he had sufficient knowledge to make a definitive decision on spirituality he read widely in eastern philosophy and world religions and still he came to the conclusion that no one group had the monopoly on truth. This was the awakening of David’s intellect in his capacity for doubt.

Well, in case you haven’t guessed already, I am David. Once I left home at eighteen I went to college and took nine years to finish my B.A., all the while drifting from one job to the next and dating as many girls as possible. At twenty I started surfing and became obsessed with the beauty and power of a new the sea, realizing the spirituality in nature and that the greatest cathedral is under the open sky with the waves raging all around. At thirty I started training in the martial arts again after a very long hiatus and learned the spirituality that is within us can be awoken through perseverance and pushing past our physical boundaries and paradoxically that self-discipline can leave our spirit unfettered by life’s mundane constraints. At thirty-two I met my wife and fell in love, marrying two years later and learning how to try to be a better person and not the complete asshole I had always been. She awakened selfless love in me and now we are having a child, which will lead us on a whole new adventure.

For me, life is one long process of questioning the dominant paradigm and weighing the answers, a continual awakening to all that life has to offer. I often get pissed off and negative and have to remind myself tomorrow is another day and there is much still that I have to learn. This is my last post here on 30 POV so I hope that you will excuse my indulgence in leaving you with a poem of my own composition, like my life it is still a work in progress. They all are. Oh, by the way, TFS and so much more to tell.

Filed under: Awakenings by dpasquarelli
14 Comments » 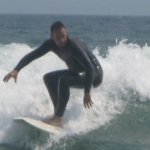