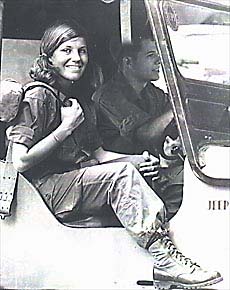 Female journalists covered Vietnam in numbers higher than any war prior.  Some of these women had previous war reporting experience.  For most, Vietnam was the first occasion in which they saw war on such intimate terms.  Often overlooked by their male counterparts, female journalists fought for a place on the front.  These women not only faced the same horrors of war as their male-counterparts, but were also subject to discrimination on a level unlike many woman had felt before.

The Vietnam War had four hundred and sixty-seven female correspondents; two hundred and sixty-seven were Americans.[1] Some would wonder why one would want to go to Vietnam.  The motives of these women varied.  Gloria Emerson, a descendant of Ralph Waldo Emerson, credited her grandmother for her desire to go to Vietnam.  Emerson had written in her memoir how “her trip to Vietnam was inspired by her widely traveled grandmother. . .whose global adventures were noted on the society pages of her hometown newspaper.”[2] Many of the women felt an allure to experience something outside their current realm, while others had already experienced war.  Photojournalist Dickey Chapelle had previously covered World War II, and “came away wanting more.”[3] Chapelle was experienced, and knew what it was like to witness war firsthand.  Many of the other women had no clue what they were in for.

Being a woman in Vietnam was not easy, especially when forced to deal with men who believed that a woman’s place was definitely not in a war zone.  Jurate Kazickas stated, “If I heard it once, I heard it a thousand times, ‘Combat is no place for a woman.’”[4] The women correspondents were subject to discrimination by the majority of their male peers, being stereotyped “as husband hunters, war groupies, or thrill seekers who created difficulty for ‘real’ (male) journalists who had a job to do.”[5] Horst Faas, a male photojournalist, dismissed the majority of female correspondents as “donut dollies and do-gooders.”[6] Kazickas also recalls the constant questions by her male peers, “What the hell is a woman doing in a war zone? . .  Why aren’t you writing about widows and orphans instead of combat?”[7]

Some male journalists accepted the women as one of their own, and even commended them on their strength.  Carl Mydans, a photojournalist, stated about female war correspondents, “women are just as brave and sometimes braver than men and that they frequently have more stamina than their male opposites.”[8] Malcolm Browne, a former AP Saigon bureau chief, had no qualms about bringing correspondent Beverly Deepe on assignments with him, and Deepe would go on to become the first woman who was a permanent member of the Saigon press corp.[9] Pham Xuan An, Western news reporter and North Vietnamese spy, remarked, “The tough people here are the lady correspondents.  They were very disciplined.”[10] However, these men were the exception to the rule.

The female journalists frequenty experienced issues receiving permission from military leaders to be able to report from the war front.  There appeared to be an innate desire to protect the women from the realities of war, and also a concern as to what would happen if the military approved a woman field reporter, and she got hurt.  According to Denby Fawcett, “The main difficulty for women journalists in the early days of the American military escalation was talking your way into combat zones.  Military commanders did not like the idea of male reporters getting killed, and they were even more horrified at the thought of a woman reporter getting shot.”[11]

When Fawcett encountered General William Westmoreland at a remote army base, it impelled Westmoreland, a family friend, to attempt to ban woman in the battlefield.  Fawcett stated, “Westmoreland’s notion. . .was prompted because he was concerned we might inconvenience and endanger soldiers who would rush to protect us in firefights.  He was also worried that women correspondents might collapse emotionally when faced with the horrors of combat.”[12] Fawcett’s encounter with Westmoreland almost stopped female reporting in Vietnam all together.

Surprisingly, Vietnam’s female correspondents were not a close-knit group.  Due to the difficulty of getting stories, other women equaled competition.  Jurate Kazickas recalls the unspoken journalistic etiquette many of the women practiced; no two women should show up with the same military unit.  She recalls, “The women were never really a group. . . .  There was fierce competition between women.  The last thing I wanted to see was another woman on the battlefield.”[13] Not all women distanced themselves from each other.  Beverly Deepe, in contrast, often helped newly arrived female reporters navigate the Vietnam scene.  Her female peers remember her fondly for the help she provided, and her reluctance to partake in the normal rivalry between the women reporters.[14] Denby Fawcett remembers Westmoreland’s proposed ban of female reporters as being “the first and last time we got together as a group.”[15] Many of these women went on to regret not becoming closer to their female peers, but perhaps it was not possible to be both “one of the guys” and “one of the girls.”

In the bottom left-hand corner of the November 4, 1965 edition of the New York Times, a headline stated “Dickey Chapelle Killed in Vietnam.”  Chapelle was hit by shrapnel when a mine detonated during a combat mission.  The article did not state that she was the first American female reporter to be killed in combat, but rather that she “was the fourth member of the press killed in Vietnam.”[16] Perhaps that was a symbol of the equality in journalism she fought so hard for.

When a group of reporters gathered in Vietnam on April 30, 2010 for a thirty-five year reunion, Edith Lederer was the sole female Vietnam reporter to go.  She commented on what Vietnam meant for women, “The Vietnam War showed beyond any doubt that women reporters, photographers and TV correspondents had what it takes to cover major conflicts and breaking stories. . . .  In all of the major wars that followed Vietnam, women have become far more commonplace in the media. For me, that’s really heartening.”[17] These reporters proved to the world that a women’s place in journalism can go into the realm of combat, where they can tackle tough issues and report them with intelligence, dignity, and honor in their work, regardless of the conditions and mentalities they are forced to endure.

Filed under: On My Honor by Christina
No Comments »