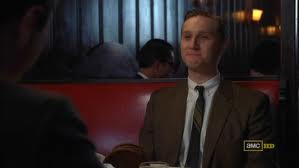 I was so happy when Ken Cosgrove reappeared on this season’s Mad Men.  At the start of the season, he had not been hired at the new firm and I waited and waited for weeks for his return.  I thought there was no way this smooth, unpretentious, laid-back, cool cat could not be among this revamped cast.  If anything, just to serve as a foil to the dishonest, skirt-chasing, business-hungry suits.  Then finally about half way into the season, in comes Cosgrove, yippee!
We all know Draper and Sterling are not honorable, but that doesn’t stop every man in the office from longing to be in their shoes.  We don’t see anyone jealous of Kinsey, or Pete, or Harry.   But those same men have all wanted to be Cosgrove at one point.  Remember when Cosgrove was the envy of Pete and Kinsey for his published work?  Cosgrove didn’t brag, he didn’t even eat up the attention when the boys found out about the story in print.  You mean Cosgrove was into a hobby not for money, for sex, for fame, but for the sheer enjoyment of it?  Novel.  The typewriter-stealer, pipe-puffer, sweater-vest wearing Kinsey  was immediately jealous.  And Pete tried, and failed, to replicate the success for himself, and to top it all off, asked his wife to visit her ex-boyfriend in an attempt to get it published.  Pete’s no Cosgrove.  Pete demands too much spotlight.
Doesn’t Harry deserve the “honorable” title?  He’s the good husband who has only cheated once, that we know of.  But to his credit, he apparently did fess-up and thereafter temporarily lived in the office.  He is guilty of tampering with others’ paychecks, but come on, he was thinking of providing for his family-to-be.  He’s a cuddly donut eater, but charming and smooth he is not. 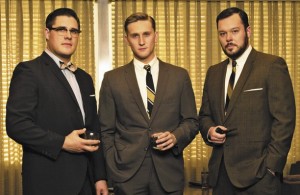 Yet Cosgrove has never let on that he wants to be anyone other than himself.  His ideals remain so steadfast that even when pulled into Don’s office and asked by Sterling , Don, and Pete, to invite his father-in-law and influential friend to a golf game – all to advance business – he declines.  He simply says “I won’t do it.  I’m not Pete.”  Did anyone catch the look on Don’s face and feel the disbelief in the air when Cosgrove explained the difference between work and personal?  Hahah, it was like “Whaaa…there’s a difference?”  I loved it.  Go Cosgrove!  I mean, come on.  Even Pete knows better than to stay with his wife in the hospital after their first born arrives.  There’s business to attend to!
At the same time I root for Cosgrove, I cannot root against the slimy, snarky, money hungry men who make the world go-round.  They’re why I watch the show!  They’re the ones with all the access and answers – except when it comes to love (Love?  What’s love?).  They’re verbal prowess for taglines or pick-up lines is exceptionally entertaining and I can’t get enough.
But Cosgrove, I’m so glad you’re here.  Disinterest makes you all the more honorable.

Filed under: On My Honor by Jojo-a-Gogo
3 Comments »

3 responses to “The Honorable Ken Cosgrove” 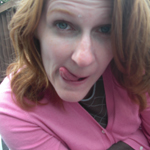