I went to a Catholic Prep school on Long Island and found I didn’t really fit in. I hung out with the “alternative” crowd—the art school kids, fans of goth music and the entertaining introverts. While I did my best to fit into all those categories, I fancied myself a wordsmith but when it came to making casual conversation with a girl, I crashed and burned.

There was a girl with strawberry blonde and an uneven bob haircut a year behind, we’ll call her Janet. I would watch her walk by my locker in between classes and think, “Wow, the maroon cardigan really brings out the color of her eyes!” We hung in the same circle of friends, so free-periods were spent sitting across from her entertaining the possibilities of an ‘us.’ Until her boyfriend would join our table.

Study hall meant two things: agonizing over Algebra or scribbling down my early attempts at writing (what I thought at the time) poetry. Hindsight shows, I was horrible at both. I wrote a poem about Janet once. It was centered around a lock of hair she left behind that I kept in my wallet. After I let her read it, I was surprised she didn’t get creeped out by my pleas for her attention. We became closer friends afterwards. Long conversations on the phone prior to the internet became a nightly occurrence. My father had to intervene on several long conversations because we didn’t have call waiting. We talked about everything—school, her boyfriend, my lack of a girlfriend and our favorite authors Sylvia Plath, Oscar Wilde and Anne Rice. We bonded on all the things that made us smile or miserable.

When I was alone and miserable, music was my safety net. WDRE was the radio station to listen on Long Island to get your fix from the alt-rock icons from Morrissey & The Smiths to Sinead and Siouxsie. Many late nights were spent listening to the radio, pen in hand, scribbling fruitless introspections into my journal, writing the depressed thoughts of a love-lost boy who’d never been in love up to that point. I would jot my favorite lyrics from songs like “Suedehead” into the columns—borrowing other people’s poetry to incorporate into my own.

It became clear to me music, other people’s poetry, could help me nurture my relationship with Janet. The timing couldn’t have been impeccable, my parents bought a fancy stereo system that allowed me to make mix-tapes!

On the highest resolution cassette tape I could buy, I made Janet the “Songs from a Really Boring Saturday” mix:

Side One:
Morrissey “Suedehead”
The Cure “Just Like Heaven”
The Primitives “Shadow”
Public Image Ltd. “Dissapointed”
Tears for Fears “Sowing the Seeds of Love” & “Advice for the Young at Heart”
The Cure “A Night Like This”
Peter Gabriel “In Your Eyes”
Elvis Presley “(Marie’s the Name) His Latest Flame” 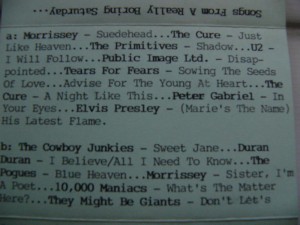 First off, I broke a rule that I use today when making mixes: don’t use more than one song from the same artist. But I digress.

The lyrics from these songs screamed how I felt, some more obvious than others. “Suedehead” is about a relationship that never came to fruition. “Just Like Heaven” is about one that does. “Disappointed” talks about the ups and downs of friendship. “Advice for the Young…” asked “when are we going to make it work?” Sadly, we never did.

Janet loved it, even with the doubled songs. She made me a cassette as well which got lost over time. I only remember Shellyann Orphan’s “Shattered” and Duran Duran’s “The Chauffeur (Blue Silver)” being on it. Senior year came and our priorities changed. I was moving to Florida for college and as I bid New York adieu, I promised I wouldn’t look back. Life after high school continued.

Enter the age of FaceBook and social networking. After 18 years, I heard from Janet through a mutual friend. She had recently gotten married and was pleased to hear I was doing well, married with 2.5 kids. Time was good to the both of us but there was that feeling of unfinished business, something we were never able to say to each other after all the time that had passed. Our email folders filled with the latest news of the day. We spoke a few times on work break. She still had “Songs from a Really Boring Saturday,” even though the tape was severely warped from overplay. I made her a “Songs . . . Revisited” CD to make up for the abuse of time.

We had a reunion with a few friends when I went up to New York for my father’s 60th birthday. Sitting across from Janet brought back good memories. My regret is how many years I let pass in our friendship. When I returned home to the Sunshine State, I did the best thing I could do to help nurture our friendship. I made Janet a trilogy of mix-discs, once again borrowing other artist’s poetry in an attempt to nurture a renewed friendship.

Sad to report that life got in the way again. The discs are still on my desk nearly three years later.

“The passing of time and all of its sickening crime is making me sad again. But don’t forget the songs that made you cry and the songs that saved your life.”

3 responses to “Finding the Right Words”

Brian W. Castro's immediate needs are simple: his iPod, a good novel and a bottle of wine. He is a born-again New Yorker living in the Sunshine State whose self-deprecating viewpoint confuses even himself. Once a fan of "sex, drugs & rock and roll," he only revels in one of the three openly. When he's not looking for deep lyrical meanings in Duran Duran's discography, he can be found staring blankly at his laptop--hard at work on his great Filipino-American graphic novel. Incidentally, this stare doubles as an intimidation tool when his children are unruly. Brian prefers to write under pressure, acknowledging deadlines bring out his creativity. But he admits, "Like masturbation, procrastination only ends up with me screwing myself."