On Poetry, Parenting and Pooping

I wrote a poem once. Maybe I’ll share it with you one day.

The setting of the poem was the ride to preschool, for a toddler and his dad. Along the way, they comment on things they see every day–a stoplight, a blue house, a certain tree where they imagine a family of squirrels might live. As a nanny, I had experienced this event enough to put it into writing, though I was still living vicariously through the father when it came to actually experiencing parenthood. Innocent and wistful, the poem purports that each moment in a parent-child relationship is magical, or contains the possibility for magic. In reality, however, the poem says more about my personality than it does anything about parenting. Driving around a city discovering new things was, and still is, one of my favorite past times.

Now that I’m an actual parent, I see this poem for what it really was: a fantasy. Truthfully, there is very little poetic about parenting. Instead of days filled with imagining and sharing, dreaming and daring, I’ve discovered that parenting relies on really only one thing: begging.   And you probably already know that all equivocal feelings between poetics and the “art” of begging ended long ago with the death of dear old John Donne. He could make even the worst of circumstances seem romantic, in the pining, pitiful kind of way. Separated from your lover? No matter; write a poem! Your lover actually hates you? That’s okay; tuck a song under the wings of a dove and send it to them! Your lover’s dead? Oh, well, that just gives you the opportunity to love them eternally, and also something to write about for the rest of your life!!

In parenting, unlike poetry, we’re too busy breathing, counting to 5, rephrasing, walking away, drinking and wishing we spoke the same language as our child to focus on the illusive beauty found in begging unrequited. In place of imagery, we’re stuck with the reality of a child’s scrunched up nose, the onslaught of a child’s clenched fist, or the backside of a child who’s running away for the tenth time today. Metaphors and similes don’t offer the amount of forcefulness a parent’s language must include–Do. It. Now. Or Else. Please.–and the effect of a well-planned out string of alliteration is completely lost on the busy toddlerhood who isn’t really listening to you anyway. No, the language of a parent must be minimal, laconic and repetitious in an unholy kind of way.

As a modern parent trying to be both authoritarian and apathetic, I’ve resorted to a question-only lexicon. As in, Do you understand me?, Did you hear what I said? or, more often than not, Hello–hello–is anyone there? In this case, I feel more like a poet than I am; for, if anyone is to answer my incessant questions, it will be my other self–the one I imagine is not only listening to my pleas, but might also respond to something I have said.

Some parents adopt the “playmate” vocabulary in vain attempts to convince themselves that they are not alone. Others attempt the high-registered, highly annoying “baby-waby” tone, which makes them feel that, one day, if the right pitch is hit while the right made-up syllable is sounded, they may just get through to their child. No doubt, many parents, especially as the terrible 2’s turn into the terrible 3’s, 4’s and 5’s, will adapt to their listening-deficient environment through the natural process of equal ignoring, that fervent yet silent coexistence that would drive a poet to self-obliteration.

Last week, we entered into that most unpoetic phase of parenting, Potty Training. In general, there is a lack of poetry in any facet of life having to do with the toilet, unless you’re reading a book of poetry while taking a crap. Paired with an unpredictable penis and apparently unpenetrable bowel movements, it goes from poetry negligence to a full on War. Indeed, if there is anything about the mantra, “Poop goes in the Potty,” that remotely indicates lyrical value, please let me know. You might be saving my life. 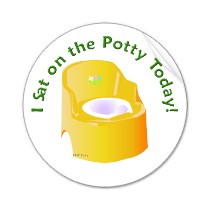 Had I known just how dull and disappointing potty training can be, I most likely would not have pursued the “progressive” course. Progressive sounded exciting; progressive indicated movement, quickness, change–all things a poem might thank you for. Though progressive p.t. could be likened to several things poems have been written about–ignorance, violence, and abstinence, to name a few–it is only poetic in its epic futility to live up to what’s been promised.

Unlike your average potty training schedule, which might range from several months to several years, depending on the child, progressive p.t. claims success rates of 1 – 4 days. According to the authors of “Pottywise for Toddlers,” if a parent commits to clearing their schedule of everything except potty training for four days, it would be practically impossible not to walk away with a potty trained child. Obviously, this is a cruel joke, an entirely made up theory with made up success stories written either to make loads of cash off of desperate parents or, to make those of us who responsibly check out books at a library get banned and possibly arrested when the innocent librarian asks, “Well, did it work?”

Granted, I didn’t actually read past the first few chapters in the book. But it seemed simple enough. In fact, it seemed so simple that I envisioned the planned four days as a vacation of sorts – a poem already written, if you will. The first day went fine; we trained “Squirrely” to potty, and he did a knockyadown job. The second day, a.k.a. trainer becomes trainee, we spent 30 minutes in the bathroom and 30 minutes out of the bathroom.  On its own, this sort of schedule hampers relaxation; but stress is completely unavoidable when there seems to be confusion about which 30 minutes was the appropriate time to potty. By the end of this day, my hopelessness had reach Sylvia Plath level. It wasn’t just that my 2-year-old wouldn’t be trained in 4 days; he would never be trained. Whenever the potty timer went off, we engaged in semantics warfare, “I don’t want to be a big boy. I’m just a boy!” vs. “Diapers are for Babies!” until the pee ended up on the floor.  If I could’ve stuck Potty Training in a turned-on oven and slammed the door, I most certainly would have.   Instead, I took all potty-training related materials–tray of treats, new thomas-the-train underpants, “backup” supply of pull-ups, “The Gas We Pass” and the special car only to be played with while on the potty–and threw them up in the top of the closet. Afterwards, I cried for about three hours and got drunk with the nanny. Hollywood? Maybe. Atlantic Monthly? Not even close.

One parenting book I read recently instructs parents who wish to be successful to “appear laissez faire” in any important debate. Their logic was something along the lines of control freaks never win. So when I woke up on Day 4 to an insistent internal urging that I was the boss goddamnit, I opted to squelch its voice but adopt its spirit. The big boy pants went on. The treat tray came out. We became parents who emanated potty training sucess. The house oozed potty training love. By the end of the day, our son was mostly peeing in the potty and had also achieved his first intentional bowel movement on the toilet. We headed to the toy train store to celebrate.

Is my son fully toilet trained, stamped and certified, never to have an accident again? Hell, no. Or, as my son would say, “No, not.” Today, I cleaned up two poopy accidents, changed the sheets on his bed once and had resorted to pull-ups by about 10 AM. The reward system was virtually useless. My patience was next to nonexistent. I was reminded that each day with a toddler is incredibly uncontrollable.

I was also given a gift, and no–not the kind you might expect, given the subject matter of this essay. During one painfully long potty trip, he looked at me and said, “What’s wrong with you, mommy?” At which point, I realized my planned disinterest had turned into obvious disappointment. “Nothing,” I said, perking up for his sake. “Just waiting on you to potty.” Rather than pleasing me, he chose parody. “I’m soooooooo proud of you,” he crooned, as though I were the stuffed squirrel. “You’re my sweet, sweet girl.” Not exactly poetic, but it made my eyes tear up. John Donne’s sonnets have nothing on my sweet boy.

I’d probably write another fantastical poem about parenting before I’d ever enter into any sort of progressive anything where toilets, my son’s poop and my ego are concerned. I’d probably even share the first poem I wrote with you before I re-lived anything that went on in those four days. But I’d be lying if I didn’t admit that there are moments of beauty to be found in almost any day spent parenting, even when it centers around the potty. Likely, you’ll have to scrounge for them, to pay very close attention so as not to miss them, all the while pretending you could care less about finding them. Or, as in my case, you might have to sit patiently beside your dangerously constipated kid, worrying, and wait an excruciatingly long 1-4 days before receiving one.

3 responses to “On Poetry, Parenting and Pooping”