I once wrote a story where the main character beats up a Wal-Mart.

Specifically, he destroys the book and magazine aisle.

The About the Author on a book jacket sparked all the rage: the character’s envy that this bald bearded schmuck and his dog—and who cares about his dog?—were somewhere in Oregon right this very minute typing away some crappy story almost everyone would want to buy.

He throws the book to the ground and stomps on it.  He rips the whole top-ten new release section to the tiles; grabs a thin “non-fiction” book about a religious man who spent some time south of purgatory and tears it clear in half; kicks and punches and grunts as he ravages the Oprah Book Club.  He runs down the aisle with his fist along the shelves, the books landing first in a cacophony of joyous thuds, the magazines last in a thousand splashes of flipping, flying, glossy, pretty pages.

He looks back to the books; he missed one.  The Bible.  He lifts it carefully off the shelf.  He gets on his knees.  He places the Good Book in front of him.  And he starts punching it.  Hard.  Crying now, speaking in tongues as he hits the bloody thing.  He forgets where he is, who he is, why he is; he becomes that deadly sin of Wrath.  Remember when Ralphie beats up the bully in A Christmas Story?  Like that.  To the Bible.

Heaving, spent, sweating, he reels back his hands and slumps his shoulders.  He looks down the aisle of his devastation.  His heart jumps and stops with a bit of fear.  He looks behind him.  He gets up, peeks out the aisle.  Nobody’s anywhere.  No customers.  The only employee is far away in the kid’s clothes section, and with his back to him: he can almost make out the “How can I help you?” on the blue vest.  He can see Smiley Faces everywhere, at the beginning and end of every aisle.  They really do seem to be smiling at him.  Is it possible that nobody noticed?

He heads calmly to the exit.  He’s afraid of getting caught but also annoyed that the customer service is so bad that nobody would hear a maniac upsetting the natural order of a retail planogram with such vehement precision.  He’s like the toddler who makes a scene and gets confused—hurt, almost—when everyone ignores him.  He decides to test it; he buys a Coke before leaving.  Surely, some disgruntled manager will come running down the checkout lane with a police officer.  Surely, they’d have received word, calls, or caught him on camera.  Somebody heard; somebody saw him.  They had to.

He’s still expecting an angry hand on his shoulder as the automatic doors slide open.  He takes one look back, nothing there but a feeble, white haired greeter who didn’t greet him, the young, pierced-nose girl who sold him the Coke, and a mom buying big jugs of water.

The book aisle in ruins and nobody knows.

Back at work now, sipping his Coke, he tells his manager what he just did.

“I don’t hate the Bible,” he replies, “I just hate bestsellers.”

Unlike my character up there, it’s hard for me to say I hate bestsellers, because I read, own, and buy so many of them.  Plenty of great books happen to sell well.  The Grapes of Wrath sold well.  The Catcher in the Rye sold well.  I haven’t read the Twilight series, but I have read Harry Potter, which sells almost as well as the word of God.

But most bestsellers—I think even the richest of writers might agree—are 100% pure bullshit.  When I’m in a bookstore, I’d be lying if I said no part of me wants to rip the shelves down in a sad, jealous stupor like my vigilante hero.  I might keep a few up there—the way Jack Nicholson as The Joker in 1989’s Batman says something like “I kinda like that one,” and keeps one of his thugs from spray painting a work of art in a museum.  But most of them, I could do without.

In the weakest of moments we sometimes place our rage in the wrong places; instead of infusing all that anger into a great story, we might want to be cynical and walk through Borders with disgust.  (Or if you’re a guitarist slash retail worker who can’t get a band going, maybe you feel the same thing at Guitar Center.  Or if you’re a failed filmmaker maybe you feel this way at any Regal…)

Mixed with that disgust, for me, is inspiration to finish something: a novel, a screenplay, a short story, a sestina, a haiku for Christ’s sake.  Anything.  I’m even inspired to blog, heaven forbid, sometimes just by one word on the cover of a book.

It’s 11:00AM.  Cool and sunny outside.  Inside it’s bright like a hospital waiting room.  I’m early for work.  I’m killing time.  Wandering Borders.  Aimlessly.  I’m never more thrilled, appalled, cynical, and inspired than when wandering aimlessly through a gymnasium-sized bookstore that is also a movie store, a music store, and a caffeine ware/whorehouse.

I see something that irks me: some author’s name in MASSIVE LETTERING and then this itty bitty little title.

Did Dickens put his name real big on shit?  Not according to this picture below, where his name is smaller than the title, but who knows?

Maybe, like Stephen King, once Chuck got huge he upped the ante on his name’s font.

It’s distracting and rude to have the writer’s name bigger than the title; I want to know who makes that decision: the writer?  The agent?  The publisher?  Either way, the answer is: Some asshole.

I mean, who is this “Darkfall” person and what the hell kind of title is Dean Koontz?

Bored, angry, not finding anything interesting, I turn one of these bestsellers over.

That’s when I find that stare, that writer’s glare, that pose you see from some prick who obviously thinks he or she knows more than you, your mom, and Jesus combined.  Usually unsmiling, not confident so much as arrogantly sure, totally invulnerable in that frozen half-second; that look makes me want to punch you in the face, not purchase your book.  If you’re petting your dog while giving me that look, stop using a prop to attract a bigger audience, and may God have mercy on your soul.

Poetry magazines that include pictures are the worst: not only did this person write a poem way better than anything you could muster on literary steroids, they are sexier than you too, and they know it.

You’d think younger hotshots would be the only ones doing this:

But the older folk do it too:

Hell, some writers have done both.  Here’s the annoying shot of Anne Tyler, whom I love:

And here’s the nice, seemingly genuine one: Of course, I still buy these books.

I still buy these magazines.

I come across a relatively new bestseller.  Attractive cover.  I’ve seen it everywhere.  This is obviously a historical romance with a twisty plot and lots of stuffy rich people having sex.  I’m also sure murder and private detectives get involved.

I smirk as I notice the top, of course: #1 New York Times Bestseller.  I pick it off the shelf and admire the cover art.

To the right, a woman in a lush red dress of satin or silk seems to hover in the snow.  In the background, a dark train streaks across a lonely winter landscape.  At the very bottom, the writer’s name: Robert Goolrick, in a surprisingly small font compared to the title, A Reliable Wife.  I’m automatically more inclined to grab for my wallet, even though I’m quite certain Goolrick’s next book will feature a woman in a yellow dress, a plane, and it will be called Robert Goolrick.

His picture, a few pages from the back, is dark and black-and-white, and he looks pissed and uncomfortable, like an annoyed grandfather rather than someone trying to prove something.

I buy the thing. 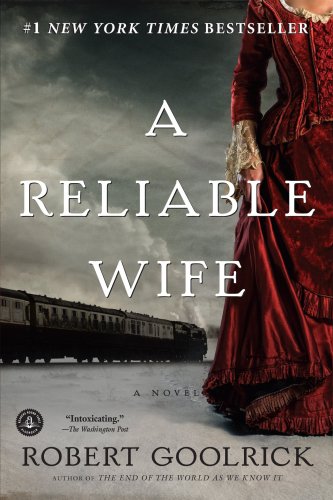 A lunch break and a night later and I’m almost finished.

It’s not really historical, except there are a couple of dates and cities here and there.  1907.  1908.  Florence.  St. Louis.  Lots of research was done on flowers, but only because one of the characters does lots of research on flowers.  It’s overwritten, but I want to find out what happens, and I guess that’s the writer’s most basic duty: make you want to turn the page.

But one thing I can tell you: I didn’t buy the book because of what The Washington Post wrote…printed right there near the lady’s flowing dress on the cover, to the left of “A Novel,” describing what I was about to open as “Intoxicating.”

I think Rowling gets me drunker.