I have never been to McSorley’s, but I still drink the beer.  As I was reading the back of a bottle of McSorley’s Irish Black Lager, I learned that women were not allowed in McSorley’s until 1970!  The shock, confusion, and anger subsided as I took another sip.  I really do not care that us women could not enter the bar until then.  Perhaps that makes me a bad feminist, but I can deal with that. 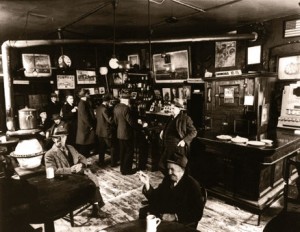 *Female photographer Berenice Abbot had to get special permission to take this picture.

McSorley’s is said to have opened its doors in 1854, and is often referred to as the oldest surviving bar in New York.  Questions have been raised about the accuracy of that, but McSorley‘s website claims it is the oldest continuously operated saloon in New York (definitely a case of good wording).

The issue of women at McSorley’s had gone on for some time.  By the 1930s, women were part of the increasing number of patrons at bars.  Although women were now “allowed” to be at bars, it did not change McSorley’s, which still continued to ban females from their premises.  In 1937, a New York Times’ article, “Is Woman’s Place at the Bars?,” provided insight into the changing times of New York saloons.  The article shares the story of the recently discontinued “McSorley’s Onion,” which was a bowl of raw onions patrons could eat to help alleviate beer breath and “fool” their wives into thinking they were elsewhere at lunchtime.  Of course, women are not that stupid, and the onion was more of a tradition than a realistic approach to deception.  (At some point in the future, the onion returned).  While other bars began welcoming women, McSorley’s held firm to their belief that a “woman’s place is in the home, or if she must take a nip occasionally, that her place is elsewhere, anywhere, but not at McSorley’s.”

It is said in 1952 a woman did enter the establishment, and even drank beer.  She was a reporter for the New York Times, and was covering the story of a 90-year-old man who had been a patron of McSorley’s for 70 years.  It is true an article exists for that celebration, but the writer is not named.  The article was sure to mention McSorley’s “no women” policy.  It goes on to state that McSorley’s was founded on a policy of “’good ale, raw onions, and no ladies’ and it has been a last sanctuary from encroaching womanhood ever since.”

It was not until August 10, 1970 that women were allowed into McSorley’s.  The change came after the mayor signed in a bill that prohibited discrimination in public places on the basis of sex.  I am not sure if raw onions are still provided to patrons, but McSorley’s policy of Good Ale, Raw Onions, and No Ladies had to be adapted, albeit unwillingly, over the years.
Sources:
John T. McManus, “Is Woman’s Place at the Bars?,” New York Times, January 3, 1937.
“Boys of McSorley’s Whoop It Up For Oldest Oldtimer, Who’s 90,” New York Times, February 29, 1952.
Grace Lichtenstein, “McSorley’s Admits Women Under a New City Law,” New York Times, August 11, 1970.

Filed under: Intoxication by Christina
15 Comments »