Man on the Mountain

Capitulation came a few months before I hit 32. My girlfriend threw in the towel, so I moved into a small studio apartment. My bachelor pad was the sort of place where you’d find a fridge full of hot sauce, beer and Chinese food leftovers. One time I smashed a Heineken bottle in the bathroom, just because I could.

While I’d always thought I was a self-aware guy, the break-up made me realize I had a few blind spots. For example, it’s a bad idea to loan $10K to a girlfriend, particularly when you’re not exactly a happy couple.

I started to question my choice of women. For good reason. Years later I would see a New York Times wedding announcement featuring this particular ex. It included a video (e-mail me and I’ll send the link – pfain84@yahoo.com). Anyone watching it who has even the most cursory familiarity with me can see that this was not a match made in heaven. When I saw it, I learned that my ex met her future hubby when we were living together. Ouch.

Even worse, this break-up was just the latest in a series of messy, dramatic splits. I finally saw the pattern, and realized I was its recurring piece. I clearly had a problem with the ladies. This was my fault, and I was very, very angry.

Thus began what I like to call my “Man on the Mountain” phase. From the depths of a base camp of depression I resolved to break the cycle. It was time to get in touch with my anger, so I decided to take up boxing and go see a shrink.

*******
Philandering is a family tradition for me. My dad’s on wife number three. Grandpa gave up marriage after his third wife, with whom he had a son at age 67–my kid uncle. The Cliffs Notes on my family dysfunction include many other key entries, which I’ll save for another day. But suffice to say, I’d spent my first 31 years trying to be “the good guy.” It wasn’t working.

Therapy taught me quickly that I can be slick, and a bit of a prick. The women in my group therapy, which was hell, made sure I got that message.

Some days I’d double up, leaving that painful 1.5-hour appointment to walk across town to the boxing gym. The place is out of central casting–it’s a former warehouse in a back alley complete with discarded needles and the like.

After six months or so I graduated to actual sparring. Most guys never did. Don’t get me wrong, I was no Marvin Hagler. When we’d watch videotape of my rounds, I felt like the tape player had to be on slow motion. But sometimes I’d land a few solid shots, surprising my coach, opponent and myself. My jab wasn’t bad, I moved well and could take punches without losing my cool.

The fear was there, however. That’s the best part of boxing. Always lurking is the possibility of getting hit, hard. It hurts. A boxer can get knocked down or out anytime. But even more powerful is the fear of humiliation. Purge that and you can be a bad, bad man. In anything.

After a while you’d start to think about it on the walk to the gym, or at least your nervous system would. The fight-or-flight syndrome would kick in–like climbing a high diving board after getting smacked by the water a few times.

When the workouts were over, I’d unwrap my sweaty hand wraps and realize I wasn’t thinking about anything. Then my new boxing buddies would go out for beers. One time a drunk tourist made the mistake of lobbing an insult our way. His wife eyed our shiners and smiles and hustled the soft dipshit out of there before one of us humiliated him.

My coach, an old boxer and former lawyer, said the worst and most dangerous boxers are guys going through divorces. They like getting hit, he said. 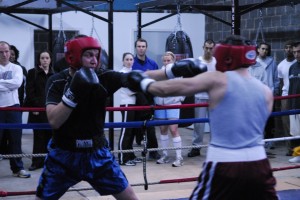 I brought two such aspiring boxers to the gym, which was filled with office drones like me and a few guys with serious talent, like the Latino community college student who jabbed so fast you couldn’t see them coming. He, like all the other bad-asses there, was never cruel. Boxing does that–it weeds out the pricks. Anyone cocky or with something to prove got taught a lesson, and either changed their ways or never came back. Your temper can only hurt you in the ring.

*******
Goddamn it was Zen to wail on a few bags, flirt with danger and violence, and then re-enter your life with a clear mind. We live in a world of constant yearning–be better, earn more, where’s that next girl or guy? Not in boxing. There, you see your limits.

I would never be as good of a boxer as my pal Steve. A 195-pound Southpaw with quick feet who could seamlessly switch lead hands, he was a fearsome force when sparring. But I learned to be good enough, to give my best. I gave him a bloody nose once. That was a good day, even though I knew he’d get me back.

Therapy wasn’t all that different. Sure, I’d been putting women on a pedestal and was a bit of a bull-shit artist myself. I realized that life is a never-ending ditch. I had a long way to go before I could have a healthy relationship, so I’d better start digging.

I got married a while back, and moved out of the studio. It’s been two years since I stepped into the boxing gym. But like an addict, I’ll always miss that phase. And you take the ring with you when you leave.

11 responses to “Man on the Mountain”