Racecars and Bowling…. A Synopsis of Gender and Me…. 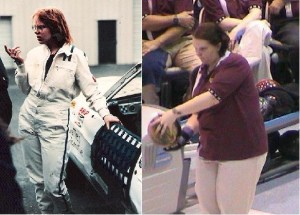 When I was 5 or 6 a somewhat older neighborhood girl I had never met before saw me playing outside and joined me.  The next day, she came again.  It was not until a few days later that she realized I too was a little girl.  I suppose it could have been because everyone calls me Chris that she thought I was a boy.  I never really knew, and I never saw her again.  My last memory of her was a drawing of a body part she left in the sand.  At that age, it was unrecognizable.  But, as a I grew older I realized it was, in fact, a penis.  Maybe she was curious about mine, and disappointed I was just a girl like her.  Either way, that memory stuck with me my whole life.  Yes, I was a tomboy.  No, I did not actually look like a boy.  My best friend from the down the street was just as much of a tomboy as me, and the only girl in the neighborhood who could keep up with the dirt and trees I normally played in and on.

As I got older, I guess I got more “girly.”  My sister was a tomboy, but she was one who wore makeup and had perfect hair.  As early 90s arrived, I became more concerned about my appearance and less concerned with being a tomboy.  I never played sports or went four-wheeling as my sister did.  Instead, I became obsessed with my hair and my makeup.  I wore skirts and dresses and all kinds of flowery things.  I spent hours on my hair with a curling iron and a bottle of AquaNet.  I got up close to two hours before school to make sure I looked perfect before I left.  When I was 14, things would change once again.  That summer I went to Monadnock Speedway in New Hampshire.  As I saw racecars flying around the track and accidents galore, I decided I wanted to do this.  As soon as I got home, I told my dad I wanted to be a racecar driver.

Most parents would laugh it off.  Obviously, and especially in New England, no parent was just going to get their kid a racecar.  My dad is not your typical parent.  On my 15th birthday, my dad bought me a racecar.  It was an Enduro car, and beat to crap, but it was mine.  That summer (with a falsified age), I started racing cars.  I had never even driven a car before.  I got a quick lesson in it before I headed out for my first race.  My dad’s one caveat to this whole adventure is that I could only enter the “powderpuff” race that went on after all the other divisions raced.  It bothered me, but I lived with it.  After all, I did not want to race just girls.  I wanted to race with everyone.  The next year I got to race with everyone, and by everyone, I mean all guys, and I did so for 10 years off and on after that.  I remember only one year that another woman raced in the same division, other than that, it was just the boys and me.  I wasn’t great, but I had some seconds and thirds, won some money and some trophies.  It has been at least 9 years since I raced.  When I think back to that part of my life, it is almost surreal.  People who hear I raced are far more impressed with me, than I am with myself.  I never thought of it being a big deal, even though I was a female in a male-dominated sport.  I raced cars because I thought it was cool.  I never thought of the gender issue.  I never thought of myself as any different from them.  I was a racecar driver, not a female racecar driver.

I still think this way.  I gave up racing because of work and school, and started bowling.  Bowling is a male-dominated sport, at least on the competitive level.  I bowl on historically “male” leagues, and I compete.  I still do not view myself as a woman bowler, just a bowler.  I go head to head against men, and many times, I beat them.  Again, I never think about the gender issue.  I have bowled against more men than women, and I strive to beat the best, male or female.  A 300 game is a 300 game.  My picture is up on the wall next to all the men who have shot one.  I am tied for the women’s house record and state record for high series, but maybe someday I will bowl a series that is just a record, no need for gender differentiation.  Anyone that has read my McSorley’s post will know that I do not consider myself a staunch feminist.  Perhaps I let my sex down at times, but I feel that my contribution to equality is by having the mindset and the desire to compete in these male-dominated sports with no desire to be acknowledged just because I am a female.  I just want to do the things I want to do to the best of my ability, not to the best of my gender.

2 responses to “Racecars and Bowling…. A Synopsis of Gender and Me….”