All the stars in the sky

You’d think, after living and breathing gender issues and gender transition for the past eighteen months or so, that I’d have something useful to say about it. I feel like I can’t, though. It’s not that I haven’t thought about it, or that I have absolutely nothing to say, it’s that there’s too much. It’s overwhelming, and it all mushes together in my mind.

It used to be simpler. When I was very young, gender existed in my mind as two arbitrary points: male and female, boys and girls. 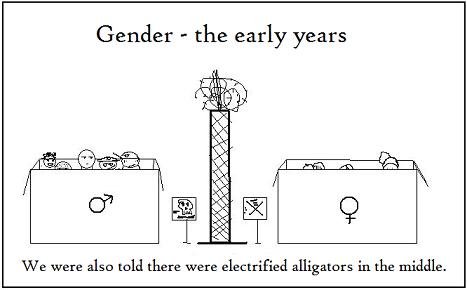 Why this division existed, I couldn’t say. All I knew was that there were two boxes, and some kids got plunked down in the “girl” one, some in the “boy” one. I found myself in with the boys for reasons unknown, so I accepted the label. I tried very hard to figure out what it meant, and why I apparently kept doing it wrong. There were names for little boys who didn’t act like society thought little boys should; I learned them all.

I think it’s that way for a lot of people, especially at first. Men and women, what else could there be? But as I got older I found there was room to move around inside that box, and that maybe it was larger than I’d originally thought. I could find a place, perhaps, where I felt more comfortable. I could even cross into the other box from time to time; the internet, and anonymous chat rooms, made it possible. I still remember typing 13/f/CT in response to the usual A/S/L (age, sex, location) queries, and finding out just how easy it was to take off one gender and put another one on. I also got an early education in how largely male groups treat girls—I immediately got dozens of requests for cybersex from horny boys (as an aside, I thought about that when a bunch of drunk guys started hitting on my wife and I at a hockey game recently. I wish I’d thought of the “sorry, we’re gay,” excuse back then). 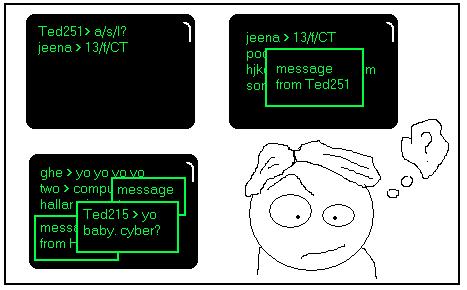 I ran through a bunch of different gender flavors, from skinny little vampire boy to long-haired slacker to pony-tailed English teacher and later librarian. None of them ever really fit me, and as time went on I felt more and more wrong in my body. When I learned more about transgender people, and began to understand what I was and where I wanted to go, my understanding of gender basically came apart.

I started to embrace the concept of gender as not two rigidly separated boxes, but as a spectrum that I could exist at any point along. This spectrum ran from cis (a word meaning “not trans,” basically) male to cis female, and there could be all kinds of places to live in between. This gave me a direction and a goal, and I started to move.

Strangely enough, as I moved along what I thought was a straight line from one thing to another, I discovered that it wasn’t so simple even as that. I wrote about my experiences slipping over some invisible gender line back in December, and I said then that gender is less like two points than it is like a huge sea dotted with islands. Now I think it may be even larger and more complicated than that, a huge three dimensional space full of all kinds of points we can exist in. Our traditional stereotypes for “male” and “female” might be points in there somewhere, though I have yet to meet anyone who actually fits those exactly. I know I’m still trying to figure out where mine is, or if I’m happier just wandering from point to point.

Everyone, as you probably can see from reading all the other posts this month, does and relates to gender in wildly different ways. Everyone is trying to get to a place where he, she or ze can feel like their body, mind and soul are aligned, wherever that may be. And suddenly this piece is about more than just gender, isn’t it?

These days, I think of my transition in the past tense. It happened. I came out, went on hormones, my body shifted and grew more feminine, I started living as she instead of he, and, finally, I got my new driver’s license with a new name and sex marker on it. My experience was, looking back, far less about gender than it was about self-discovery and acceptance. Every trans person experiences gender and transition (for those who do transition) differently, but for me it felt kind of like this: I was a boy who grew up to be a woman. Or, better: I grew up to be me. 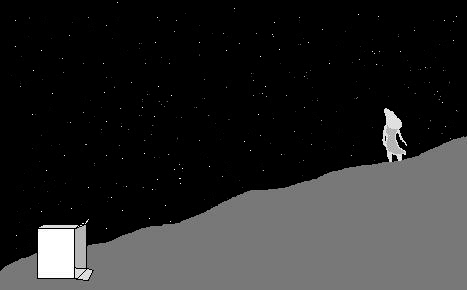 I’m thinking I’ll never be done exploring my own complex relationship with gender and identity. I’m still trying to figure out just what kind of woman I want to be, and I have not managed to come to terms with a lot of my past yet. Still, it’s good to be traveling. There’s a whole universe out there to discover.

14 responses to “All the stars in the sky”

Susan Bigelow is a librarian and writer who lives in Connecticut with her wife and cats. She is obsessed with Twitter, politics and books, and thinks that only just now is life starting to get interesting.