I have had about 25 ideas fo what to write this month, all sub par, and far from entertaining for me to write about, it all seemed to be a task.  I have hemmed and hawed about this responsibility, started like 6 different times and yet I still sit in front of  a blank page.  So here I am, sitting at the kitchen table like I have for so many hours before, we just did bunch of bong hits, I have my earphones in, I’m listening to Testament and its 1:31 in the morning.

It occured to me tonight, while in this haze of pot smoke, Thai BBQ Pork, and laughs with friends that I wait until the last possible moment to do EVERYTHING, despite my own coaxing, and constant mental reminders, so it’s not a matter of not remembering I have to do things. Simply put, I choose not to hear it. This attitude may be damaging, and may also be the very key to why I can enjoy life even when at its most harsh and extreme.

I am an inadvertent thrill seeker. I already know I gather thrills from places most people would never consider; some of those same people also think skydiving is a perfectly good idea. I disregard their opinions entirely. What right thinking individual jumps out a perfectly functioning airplane on purpose?

Take, for instance, working in the construction industry. I worked as an equipment operator for 13  years, and during that time I repeatedly put myself in the position of certain death given any sort of mechanical failure or freak occurrence. My life, and the lives of my co-workers, was often in my hands. This was my job.  A rush. 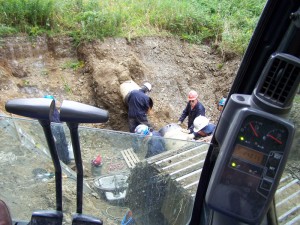 This is my view during an initial cut on a live 24 inch pipe in Morrisville NY. It is what is called a Hot tap, where the pipe is still full of Gas, but at atmospheric pressure and without the presence of oxygen the gas cannot ignite. On this Job we blew down 10 miles of pipe to upgrade to a higher tensile strength pipe for a larger service at SUNY Morrisville.

Why would any rational person want to do this? The Adrenaline junkie in me says its fun, and I honestly love the work. How many people can say they have worked on cross country pipelines? There is something violent and exciting about the idea of digging next to a pipe 2 feet across, with a 70,000 pound machine capable of producing enough force to rupture, with even a glancing blow, that is positively ringing with the pressure of the gas coursing through it. It makes you feel alive. Concerns about my personal safety should something happen? I never heard any.

My selective hearing is also an ever present force on my decisions involving my choices in musical entertainment. I like my music loud, and fast. With lots of aggression and energy.

When I was 14, I started going to Hardcore shows in Boston/Cambridge/Allston/Brighton. The first actual experience I had at a REAL club was at The Channel, a special sort of place, located on a very large lot that was often home to abandoned cars, couches, and assorted debris. The club itself was a black, single-story cinderblock building,  with the club’s logo painted on the side. The building itself was on piers over the Fort Point Channel, directly across from the Post Office and Gillette. Kind of scary, especially at 14. There were times there when we had so many people dancing that I’m not sure how the floor didn’t collapse sending us all into the frigid, turbid water of the channel below us. The Channel was the place where I had my first taste of throwing caution to the wind, aka. Selective Hearing. At the shows it would be me and 400 of my best friends, all there for one reason, to dance, and dance hard. 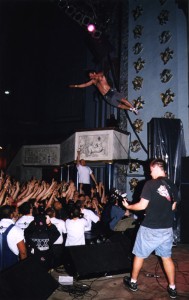 This show was INSANE.

The first time I saw a real pit I was scared shitless. Before I got a chance for that to really take hold I was caught up in the swirling miasma of bodies, flailing, kicking, jumping and sweating. I felt like I was fighting for my life, scared to death. I was going down, on my way to being trampled to death beneath the stomping feet of my soon to be newest friends.  Thats when it all happened, while fending off blows and dodging kicks, I managed to slip on what I referred to from that point forward as the Channel floor slime. I saw my life flash before my eyes and just as I was about to curl up and wait for the badness to happen someone grabbed my arm, and another, another… I was back on my feet, getting a pat on the back, was I OK? Yes, I was! I survived! I thanked my rescuers, and spent the rest of my afternoon ‘Dancing’ with my new friends. I did this every weekend for many many years; sure sometimes people get hurt, but there is no malice intended. Most times.

Things started to get violent, people were getting stabbed, ganged up on, and people were afraid to go to shows. I continued to go, to support my scene, Fuck FSU, fuck  fear for art. I never heard the fear.

You know what? Fuck procrastination…

I have managed to put off every single important thing in my life until the last moment, which has resulted in my missing out on great opportunities, unnecessary drama, and overall suckyness.

I have been unemployed since December of last year, no fault of my own–the construction sector is still hurting. I find myself in a bad spot, and I know I have to do something to right my course.

I’m fighting tooth and nail here, and every part of me says don’t worry, you will be OK.

I wont be OK. I will be homeless. Again.

I wish I could understand what makes me behave this way. Moreover I would like to FIX it. What will it take for me to finally realize that noone is looking out for me?

After having been in situations before where I lived as a Squatter in a factory building, with no showers or kitchen, or money and at times eating out of garbage cans and some times not for days at all; or, staying in a ‘Wet’ Shelter in a dangerous and unfriendly city, surrounded by addicts, and people who would as soon rob you blind as say hello; to the time I spent in a Adult Rehabilitation Center, run by one of the large Catholic charity organizations, where–although I was there for the help had a religion forced on me, and when I refused to be a part of it at a level beyond JUST participation in events, when I REFUSED to change my personal ideology, was told to leave, put back onto the streets; you would think I’d come to see that I am the only one who can make this life work.

Luckily I have had friends who look out for me.

One in particular. Jenny Boom. aka Genevieve.

In the last 3 years, I have had so much in the way of bad happen to me. Jenny has always been there to help, to do what she can. This has put alot of stress on our friendship, sometimes the very sight of the other makes us want to Rage.

Things have gotten bad, she has done everything for me, and now the time for that is ending. I welcome it. Mostly so I won’t have to hear Jenny call me names, or insult me, or make me feel terrible. Before anyone rushes to judgement, please consider what I have put her through. I deserve some of it. Some I don’t, but sometimes things get said. I wish hadn’t heard alot of them, but overall this is a huge case of Selective Hearing. I know she would do anything for me. She already has given me everythign I have, Including her love. No matter how bad things have ever gotten, no matter how many times I have left the room bleeding, crying, or just hurt and insulted. I dont hear it. I love her. She loves me.

Its very Bobby and Whitney. We love HARD.

I’m going to miss her when I go. She is my best friend, someone I would do anything for, ANYTHING.

This is for you my Jenny, you will always be MY Jenny, I’m sorry for all the terrible things I have done over the years, and the torment and pain I have caused. I appreciate every single second I have had with you. Leaving the comfort of your embrace and constant companionship is going to be so hard. I’m sitting here at the same kitchen table I was at 5 days ago when i STARTED this. I’m crying, and I hurt. I dont want it to end.

I refuse to hear Goodbye.

Filed under: Selective Hearing by dimpindesign
No Comments »