I have had a lot of peculiar things running through my mind lately. It appears that the very nature of my being has been infused with some chatty bastard of a she devil. I have said and done some things which I, in the past, would not have thought possible or plausible. As I’ve aged I have stopped fighting against whatever path I happen to find myself on. This path though, while to others might have seemed daring, has been quite safe and formulaic for the last several years. I have been hiding behind a façade of woo-hoo when in fact I have been sitting here feeling quite ho-hum and boo-hoo. Sometimes you find that your path has become so heavily trodden and well traversed that your footsteps have worn it down into a deep sad blinded trench. Three months ago I realized I was trudging through life with blinders on.

The one thing Buddha does teach you is ,” This too shall pass. ” When you let go of attachment to something… your relationship to it changes. I chose to let go of my attachment to misery. The definition of crazy is doing the same thing over and over again and expecting a different result. We all know this and yet I was miserable and it wasn’t changing. I had become so attached to it, as if it somehow was a part of who I am; like the blonde hair, the scar on my leg from the metal can, the impaired vision requiring glasses–cool glasses mind you. Even these things aren’t truly who I am but they are the basic facts of my physicality. The basic fact of my psyche though was this, I didn’t have fun anymore. I didn’t get invited to things anymore. I smiled on the street at people and chatted everyone up in that same safe formulaic way. Close enough yet far enough. Near and far. Then one day I decided that I had to do something. I was either going to walk in front of a bus OR throw a wrench in things and do something absurd. That one absurd thing led to something else even more absurd until eventually somehow my formula seems to have become all jumbled and blown to bits in a matter of the last several months. I say this because apparently I have found myself on the naughty path to eternal damnation. I am trying to maneuver unfamiliar territory and be in the moment. To explore, witness, and experience. To boldly go where, well, where I never thought was an option, I guess.

And so, I have become quite wicked. The last week began with G rating and has day by day crawled its way through nearly the entire ratings systems. My new motto seems to have become “Do One Thing Everyday That Makes You Feel Naughty”. I guess that herein lays my quandary. When is mischief good and when is it bad? I am not speaking of the bad that is ‘oh, sooo, good’ but the kind that makes you clench your teeth with wide eyes and pulled back lips in a ‘oh holy, what were they thinking’ kind of way. If no one gets hurt, if there is no collateral damage to said mischief, if looking back on it 5 days, months or years brings a flush to the cheek rather than a regret. I suppose these are all relatively harmless means of mischief. There is not only regret in what we have done but there is a more woeful regret. A life unexplored.

Realistically I could be halfway through my life, or more. All of us could be. We don’t know. On one hand that is sad and elicits responses of fear but on the other…it can be very liberating to think of the impermanence of life, of possessions, of debt, of misery,yes and even of joy. Thank you Buddha, for ”This too shall pass.” I am trying to be in the moment. I am trying to become an explorer of my own realm. I am still butting up against old habits; old ruts in the ground that want to divert me off the trail of absurdity into the old sad trench. I am trying to bring the play back into my adult life. The youthful wtf that I think I used to have. Did I? Maybe I was always a little bit of that safe girl. Sure, I SEEMED risqué, mischievous and deviant but deep down inside it was all strategically handled. I may have been in the room but I was the farthest away from fire. I avoided the fire by never getting warmed by it. Now, I want to run through the fire but I am traversing unfamiliar ground.

I have behaved far too often in my life, especially as of late. My role in life seems to have been that of the nurturer, the care taker of others, and quite often, subsequently, the masochist and martyr. It has been the easiest path. Not the desired path, but the familiar. If you notice, none of them seem very FUN. Inevitably I end up spent, exhausted and empty as everyone walks away with their egos and their lives bandaged and kissed better. Perhaps no one will be there to bandage my life or kiss my ego but I would rather wake up with a sorely broken, bruised and battered ego with no regrets at lost life than how it had been playing out. At the end of the day I can laugh at myself, even if others can’t. Because, at the end of the day. I am the only person I will need to answer to and those naughty things I did at 34, those will be the seeds for a fruitful fuller life. The life that begins with a sparkle in the eye, an idea, a wink, a chatty little she devil whispering in my ear.

So, with mischief firmly embraced, watch out world…. 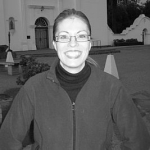 Michele Martin is the founder of the sustainably minded and holistically focused pet business www.luckydogorganics.com. She is committed to educating people about the true “cost” of things and firmly believes that sometimes you “spend” alot more when you save those few dollars. Michele enjoys hanging with her boxer Bella and eating gluten-free goodies while obsessing over Twitter.