In the kitchen which I will soon cease to half own, is a pair of 3 holed Doc Martens.
I look at them, and I remember another pair of docs. Oh, how I remember, as Yule looms ever closer. Dangling it’s promises, both good and bad, over my wicked head.
No, this is not a bitchfest about shoes.
Rather, it’s a cautionary tale from 5 years ago-with an addendum.
You know, when you’re bad, Santa really does bypass you.
…but if you’re truly wicked, he makes you spend the day watching others, the ones you love and care for open their gifts while you sit there. Alone, with a lapful of someone else’s discarded wrapping paper. 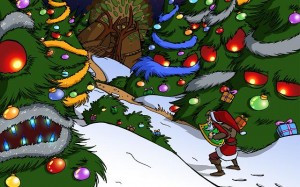 Brilliant other big girl made me a picture.
She spent 5 minutes on it, and she spelled my name wrong, but I’ll treasure it, because it’s all I received for Yule this year.
Big kid spent time with the other kids here, making cards for the handyman of the farm we’re visiting. I got many rushed and hurried “thank-yous” for the gifts she received, but nothing else.
Well, that’s not entirely true.
I was the unwilling recipient of a major shit-fit when she was asked for the 5th time to clean out the backseat of the van.
Not exactly a gift.
I’m very glad that she and the little kiddo enjoyed their gifts, I’m glad that he enjoys the Doc Martins that I ordered from England for him.
…not so much as a card.
I might receive presents from other friends, but yet again, I seem to be finding myself an afterthought.
I got to take pictures for his parents, for their Christmas present, instead of spending time just enjoying the day, like everyone else got to.
Of course…
…everyone else got presents, too.
I am an interloper, an inconvenience, and an irritation at best.
It’s not even about the gift, or lack thereof, really.
…it’s the fact that I seem to have been forgotten, this time while I was standing…right…
…here.
Perhaps this’ll become another “holiday” like my birthday, where I want nothing more then to spend the day in bed, hiding from people who know me.
As I step from the portal of my mind’s eye, striding purposefully towards that past-self, that former me, I know that I’m yelling. At myself, as I wish to fuck someone had attempted to shake me from my self saddened moorings. 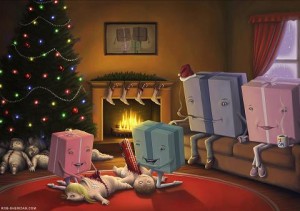 Run.
Why the FUCK are you sticking around, self?
Seriously. Have we not experienced that life has a tendency to get worse, rather then better?
Has life not given you another boot to the slats, giggling over you, drawing a foot back while you try to gasp for breath?
What can we learn from this? Something..important? Something..potentially…life altering? No? Damn it..
Why the hell aren’t you hitchhiking home?
I mean, shit. Call your dad, and get the fuck out of Dodge.
You have no job, no income, and really.  No money, but you managed to get them gifts.  Some pretty kickass gifts, at that.  It’s not about the money spent, but you put some serious fucking thought into those things.  Look at big girl’s face. She’s over the damned moon.
Not. Even. A. CARD.
So, self. By now, you should see the writing on the wall.
Oh, but make sure you take the little girl with you. She’s going to be ruler of the universe, someday, and you’re going to want to be at her inauguration.
Yeah, take the big one too, if you can. Sure, she’ll be a surly teenager soon, but after that. Oh, after…well. You’re going to want to have a front row seat, as she discovers that perpetual motion machine.
Him, you should leave here on the farm. 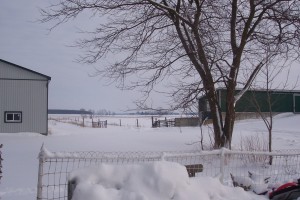 Perhaps he’ll be happy here, and if not?
Fuck  it, because it just ceased to be your problem.
It’d be great if at this point, with the distance and the changes, that he’d be able to have quality time with the girls.  Both of them.
It isn’t anger.  It isn’t vengeance.  I’m not out to hurt anyone.
I just want the girls to be happy.  To feel loved, cared for, and listened to.
That’s not something that I should have to fight for, to have happen.

Filed under: Paradox by labtechgoddess
6 Comments »