The television, that insidious beast, that Medusa which freezes a billion people to stone every night, staring fixedly, that Siren which called and sang and promised so much and gave, after all, so little.-Ray Bradbury

As this year finally judders to a long anticipated end, it’s time to look back, and recap.

On the world view, this year has been a veritable cavalcade of Hollywood funerals.  We said goodbye to Patrick Swayze, Les Paul, Walter Cronkite, Farrah Fawcet, Micheal Jackson, Captain Lou, and far too many others.  I may not have liked, or respected all of them, but they collectively form a great deal of my childhood flights of fancy.

Everyone has an opinion about Barrak Obama being made president of the US.
I hope he does a good job.
This is the same wish I have, every time election time comes nigh.
Do I care what colour he is?
Not in the slightest, although I do recognize that it certainly has captivated the imagination of many a journalist.

H1N1 also made it’s debut this year, inciting waves of terror through those who watch the news and are brought under the spell of overly dramatic news broadcasters.
It’s.
The.
FLU.
Yes.  It’s a particularly nasty strain of flu.
No, it doesn’t necessarily mean you’re going to die if you catch it.
I really wish that people would cease being so sheep-like and start to think for themselves.
I suffered from Scarlet Fever as a child.  Perhaps that’s why I refuse to take this pandemic so seriously.  I’m sure they don’t get the awesome, fever induced hallucinations I experienced, though.

The US and Canada borders now require passport identification.  This is a little irritating, but in the “Wake of 9-11”-is it any wonder that…  No, you know what?  This needs to get said.
The border security is a joke.
Not allowed to take fluids over 100ml.
Fine, but I’m allowed to take my laptop battery?
I’d go into detail as to why this is patently stupid, but I suspect that it’d just ensure that I’d get pulled over by one of the “random stop” gustap...I mean, helpful travel security people, and offered the opportunity to reveal all.

Locally, we had yet another garbage strike, as the contract came due for the city workers.  It’d be nice if both sides could put aside their differences so this city wouldn’t become a plague ridden rodent haven in the middle of a swimming pool-less summer, but I suppose that’s too much to ask.   The best part?
After screwing the children of this city of their summer, their parents of the city of Toronto programs, camps, and other activities that they’d gotten up early, paid for and registered their children for, the city capitulates when the negotiations finally make it to the agreement portion of the show.

On a more personal note, this has been a year of many changes for me and my family.
My sister and her family suffered personal loss from accidents this year.  My eldest step daughter blossomed forth into a teenager, and promptly decided by her actions that she could no longer live under this roof.
She now resides with her “real” mother, and I hope that she works through whatever personal problems she’s decided aren’t her fault.

I made the decision to re-enter a community I’d walked away from a very long time ago.  Surprisingly, I’ve been well welcomed.  That’s been one of the few high points of this year.

I managed to finish my Divemaster’s course, so now I can sit by and watch other people SCUBA dive, while I watch to be sure they resurface.
There’s another.
I rescued 2 wild birds, and managed to return them to their natural environments.  I call that a serious win, as my track record for avians tends towards the abysmally low. 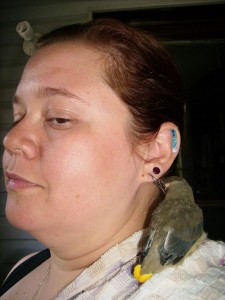 Lush, the scarlet waxwing, decides to sample my earring.

I’m firmly back in the powerlifting groove.  It’s been extremely useful for me, in dealing with things that hurt.  It may seem somewhat paradoxal, but having sore muscles from pumping iron is an improvement over waking up, and not being able to get out of bed because things hurt so badly.  I’m sure it’s not going to be a long term solution, but it’ll do for now.  Plus, muscles are awesome.

I agreed to take part in a documentary about scars.  It’s been extremely difficult for me.  Much moreso then I thought it would be.  In time, I’m hoping it’ll be cathartic.  Who can tell?
In less then a week, I’ll be winging it to BC to see my sister, who’ll be taking a tattoo gun to one of those scars.  I’m looking forward to that..much more then I thought I would be.
Changes, and final chapters.

…and because with every turn of the wheel, I try to look forward and make at least small goals to reach in the coming year.

I really do need to learn how to drive.

6 responses to “The television, that insidious beast, that Medusa which freezes a billion people to stone every night, staring fixedly, that Siren which called and sang and promised so much and gave, after all, so little.-Ray Bradbury”