“Love Should Be Multiplied, Not Divided” 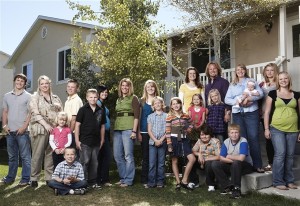 Image from The Clicker
The topic for this month is Summer of Love.  I normally blog about historical topics, and I could have spent this blog detailing the phenomena known as Haight-Ashbury.  However, as soon as I heard the topic, my first thought was the show Sister Wives.  Most everyone knows it.  It seems very few who judge it have actually watched it.  One of the benefits of being an atheist, at least in my case, is that I do not judge the religion of others.  The acceptance of other’s personal beliefs leads me to hope for the acceptance of mine.
I was excited when Sister Wives first appeared.  I watched intensely for the first few episodes, and ultimately concluded that there is nothing wrong with what they are doing.  Yes, I said it.  I think polygamy is okay!  I know I am not the only one who thinks this, but often I feel as if I am.  I find Kody, Meri, Janelle, Christine, and Robyn endearing, real, and brave.  It is no easy task to reveal that you are leading a lifestyle that does not coincide with the typical Christian-American ideal.  What they have received for their openness is persecution.
My thought on this matter, inclusive of gay marriage as well, is that what consenting adults do in regards to love and marriage is between them!  It is not my place to tell others who or how many to love.  It is also not my place to define marriage.  Furthermore, it is not the place of the government to define what love or marriage is.
I think many people conjure up images of child brides when they think of fundamentalist Mormonism.  The Browns raise their family in a way that provides acceptance of the fundamentalist, as well as the mainstream church.  They do not push their children to adopt a similar lifestyle, and in fact, some of the children have openly stated they want a monogamous marriage.  Furthermore, Kody Brown is not marrying his underage daughters off to much older men.  The Brown children are very much like other children.  I doubt we could find a starker contrast to the Warren Jeffs of the world.
There are a few points I would like to make in regards to polygamy.
Religion
The bible does not specifically condemn polygamy, especially in the Old Testament.  Abraham, Jacob, David and Solomon are just a few of the men who were polygamists.[1]
Nature
According to one researcher, “We may think of ourselves as a monogamous species, but we’re coming from an evolutionary history that’s probably slightly polygamous.”[2]
Culture
A USA Today article states researchers found polygamy present in 78% of the world’s cultures, including some Native American tribes.[3]
My thoughts on polygamy also extend to polyandry, in which a woman has multiple husbands.  Limiting or defining love is not the role of the government.  Definitions over time will always differ, customs will change, and we need to change with them.  Does the fact that Kody Brown has four wives truly affect any of us?  No.  There are greater battles to be fought than the condemnation of a man who loves four women.  Four women, by the way, who choose to be part of a multiple wife household.
Finally, since multiple marriages are not allowed in the United States there is no case in which to prosecute Kody Brown.  By our law, his other three marriages are not valid.  So technically, he is only married to one woman.  Furthermore, we do not prosecute men who have affairs or children by women other than their wives, so how can we prosecute him?

Filed under: Summer of Love by Christina
No Comments »