My family name is an alias. As the story goes, my great great grandpappy had to skip town because he stole someone’s pig. He blew out of Nowhere, Texas, and eventually surfaced in Georgia after a stint in Mexico. New name and new life as a traveling preacher.
It’s a great story. I dig the pig detail. But after some detective work, my uncle and I discovered a likelier tale. After he died, the rascal in question left some of his meager estate to a mysterious, unrelated family back in Texas, where he’d taught coeds at a secondary school. Eureka!
“That sounds more like it,” my grandfather said when we told him. You see, the paternal line has a penchant for young ladies and cheating. My sleuthing uncle, for example, is the product of a third marriage. He’s in his mid-twenties.
Back in the day, I fancied myself a departure from this multi-branched family tree. I was going to be a righteous man, and not of the slick-talking preacher variety, either.
That didn’t work out so well. In fact, I only got to the hot-ass summer of my 20th year before I really gave cheatin’ a whirl. Hell, I didn’t even get that far. Sure, I wasn’t married back then. So I was just making little girlfriends cry. But I did it in style: I messed around with my buddy’s girl, who just happened to be my girlfriend’s bestest pal. And how.
**********
Looking back, my malevolent id probably decided to go there before we held The Pirate Party.
My friends and I were working various summer jobs back in Rustbelt, Ohio. One guy’s dad owned a bunch of houses down in the student housing ‘hood around the local university. We cleaned the dumps out after college kids spent the year trashing them. The empty pads were great for parties, particularly the over-the-top themed debacles we liked to throw.
This was the party, however, where we jumped the shark. The ‘Nam Party had been great. Who wouldn’t like a house decked out in authentic-looking brush, gathered during our road crew work? Follow-ups like the superhero night and even the one where we all wore nothing but helmets and boxer shorts were also hits.
But there was an over-the-top, slightly wrong vibe to The Pirate Party. Our outfits were great. You can get some crazy shit in Ohio thrift stores, or at least you could back in ‘94. But maybe we’d just gotten too old for this sort of sophomoric revelry. Part of it was just that I got way too drunk. The mother of all excuses, I know. But it was true in this case. 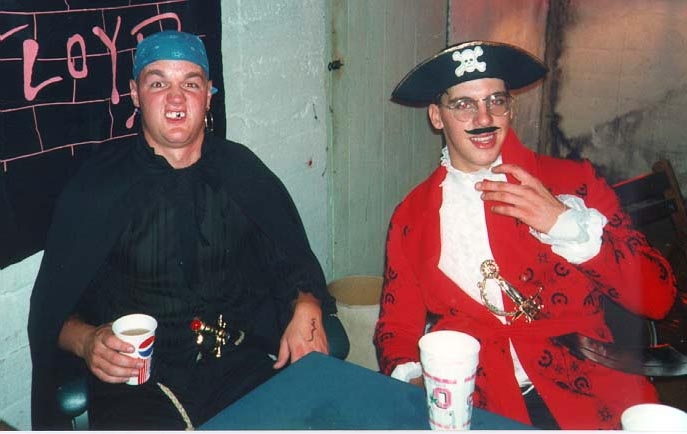 My girlfiend’s friend worked with her at the community swimming pool. They ran the concession booth. I used to go visit them with my buddies from the road crew, often after we’d spent the day slinging trash or pumping sewage lines. They’d give us free ice cream cones and shit. Living large.
My girlfriend got jealous one time, and accused me of flirting with her friend. I angrily denied it.
But that night, in my pirate’s duds, I put out the pilot light in my brain. Not sure why, but my self-destructive side was working it. I have vague recollections of my girlfriend leaving because I was too drunk. So then I chugged some godawful margarita and, poof, nothing. I retreated fully into the subconscious, where I bumped into my buddy’s girl, or so I’m told.
The next morning, I had flashes of brief memories, like a series of Polaroid shots from my cerebellum. They weren’t good. I came down from the dingy attic where I’d slept. My buddies, who were strewn around the living room, all stared at me in disgust. They knew what was up.
That was a bad day. One of the worst, actually. I hated myself, so I decided to do something about it, and drove straight to the pool.
When I talked to my girlfriend, the worst part was that she was so nice, apologizing for leaving the party. After an initial pause, I told her “we needed to talk.” As she was processing–I swear this is true–the other girl walked in. She looked at her, turned to me, and told me to get the fuck out.
This was before cell phones. I probably tried to call her parents’ house a few times that day, with no luck. She called me that evening. Before I could get in a word, she gave me the harshest speech I’ve ever heard. All I remember is the line: “You’re a black stain on my life.”
Visiting my buddy was even worse. He’d already heard that something went down. I told him the story, as far as I could. And he basically forgave me on the spot–telling me that the relationship with his girlfriend was doomed anyhow. “Fuck it, man. We’re still friends.”
**********
Not really. I went through a month or so of anxiety, insomnia and guilt. It was awful. Not liking yourself is rough. And, slowly, my friend stopped wanting to see me. We actually haven’t talked since that year. He could never forgive me, and I don’t blame him.
My girlfriend did let me off the hook, although she probably shouldn’t have. We got back together after a couple months. But it never took. The betrayal was always there. We could be having a great day together, and I’d see it flash in her eyes. We were done. Not too long after we called it quits, amicably. But the shame never totally vanishes.
Selfish shit that I am, I mostly remember just not liking how it felt, rather than feeling bad about my ex and ex-friend. Those dark days, I’d keep my buddies out late, frantically talking about anything to get my mind off of it. I felt lost.
Sure, I’m remembering the drama. I moved on just fine, like any 19-year-old will. But I tested a boundary. The thing is, I feel guilt, in a big way. I’m not a saint or anything, but I can’t stand being a cheater. Some people can, and I try not to judge. It’s just not for me. My only lingering regret is that I’ll probably never be able to dress like a pirate again without feeling like an ass. And that’s a damn shame.

Filed under: Summer of Love by Pual
14 Comments »