Sinners in the Hands of a Forgetful God

I think I’ve learned something: going digging in my basement clutter is never a good idea if I’m pressed for time and don’t feel like a nostalgia trip. I unearthed boxes of old junk from when I was a high school teacher, including a teachers’ edition of a textbook that I was probably supposed to return. I blew the chalk dust off of it, coughed, sneezed, and opened it up. I’d made all kinds of irreverent marks in the margins, all of which seem completely silly to me now. Someone else, I thought, wrote those things down. Not me. How could I have? I flipped through, past the poetry and the sliver of Macbeth, and finally settled on a well-creased page with the great sermon of Jonathan Edwards.

270 years ago, an early American theologian named Jonathan Edwards delivered his famous “Sinners in the Hands of an Angry God” speech to a crowd of terrified and probably very warm (it was July) churchgoers. As you might guess, it wasn’t a speech about a happy and loving God. Rather, God is fiercely angry with “all you that never passed under a great change of heart, by the mighty power of the Spirit of God upon your souls; all that were never born again, and made new creatures,” and is just about ready to unleash a serious smiting. “The God that holds you over the pit of hell, much as one holds a spider, or some loathsome insect, over the fire abhors you,” Edwards thunders. “…You are ten thousand times so abominable in His eyes as the most hateful venomous serpent is in ours.”

The sermon is the leading example of the prevailing theological current during the Great Awakening, which rattled New England during the 1730s and 40s. The Great Awakening is one of those things that means almost nothing to us now, but its emphasis on experiencing religion as intense emotion and developing a personal connection to and understanding of God echo down to our own time. These big ideas became part of America’s DNA just as much as the Enlightenment concepts of individual liberty and democracy, which flowered during the Revolution a generation later.

This little piece of the Great Awakening that we’re most likely to be bored by in high school happened not far from where I sit now. It was delivered in Enfield, Connecticut, which happens to be the town where I’ve lived for the past decade. Edwards even tried to get the congregation to come to Christ by taunting them, asking, “Are not your souls as precious as the souls of the people at Suffield, where they are flocking from day to day to Christ?” Suffield is across the river, and yes, it is and always has been a much nicer town. I can absolutely see them flocking to Christ while the people of Enfield hung around in the fields and got drunk.

I’ve ridden my bike up around the old Congregational Church in the historic district (which is mainly old houses from the 1800s), and I’ve thought to myself, Edwards spoke here. This is where it happened. Right here. This was the ground.

Or was it? I found out later that the Congregational Church had moved around a few times, and that Edwards had given his famous sermon in a building that no longer exists. The Church website isn’t exactly helpful, either, saying only that the sermon happened in their “second building,” which was located… somewhere? Therefore, the ground where the current church is had nothing to do with “Sinners in the Hands of an Angry God,” unless perhaps a frightened parishioner ran through it, screaming, when the sermon was done.

As a people, Americans tend to fetishize certain aspects of our history while being oblivious to almost all of the rest of it. My town is suburbs and strip malls, built on hills and rivers and marshlands, all of it a monument to transience. I was rambling aimlessly one day through one of those awkward leftover wild areas suburbs always have, stuck between a soccer field, a residential development, office complexes and the grocery store, when I came across a rusted motor, next to some kind of farm tool. The whole stretch, industrial plants, soccer fields, tract housing and more, had once been a vast dairy farm. The proof rusted right there in front of me, though there was no sign or monument to mark what had once been. As far as the people who live and work here are concerned, it’s always been this way.

There are ruins along the Scantic River, which the curious can wander in and out of. What are they? Why are they there? Visitors to the park along the river don’t know, there is no sign or marker. They’re just a thing that exists, a rapidly fading piece of the past. Something as solid as a town seems so permanent, but in reality it’s nothing more than mist. Even the people blow away with the breeze; how many descendants of the families who sat in the church and listened to Jonathan Edwards remain? Most of the people who are here now are like me; newcomers. In time, we’ll find another place to settle, and make new lives. Our society is built on mobility and forgetting. 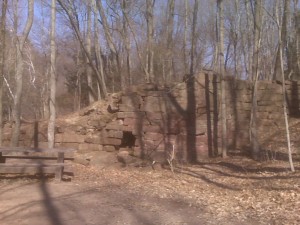 I sat on the cold concrete, reading the piece of the sermon in the old textbook, thinking about the person who had read it with two classes of high school students more than a decade ago. I was a student teacher, they were sophomores, and the world just before the 2000 election was such a different place. I have to imagine that if I passed by any of those students on the street now, we wouldn’t be able recognize one another in any way. Everyone’s always growing and changing in profound ways, though we like to think we’re all models of constancy.

Growth and change isn’t always neat and easy to understand. How did a sleepy little town where people flocked to hear a Northampton preacher tell them just how awful damnation was going to feel morph over the centuries into the confusing mishmash of city, suburbs, farms and all stripes of humanity that it is now? Is the town we have now a sign that the people didn’t listen to Edwards… or a sign that they did?

I ran my hands over the old textbook, wondering to myself, who were you? The answer is lost somewhere, buried in the past. Maybe there’s some vital piece I’m missing. After all, we can trace a long and shaky line from Edwards to how Americans today experience religion. On the other hand, maybe there’s only a lonely piece of machinery rusting by a forgotten stream to mark that yes, someone was here, long ago.

3 responses to “Sinners in the Hands of a Forgetful God”

Susan Bigelow is a librarian and writer who lives in Connecticut with her wife and cats. She is obsessed with Twitter, politics and books, and thinks that only just now is life starting to get interesting.