History Lesson in >1000 Words “The Preacher and the Prostitutes”

My friends all know I am obsessed with prostitution, especially nineteenth-century prostitution in New York.  So here is a quick history lesson on the Reverend John Robert McDowall (The Saint) and his efforts at reforming prostitutes (The Sinners) in the Five Points district of New York.

John Robert McDowall was born in Fredericksburg County, Upper Canada on September 20, 1801.  He spent much of his life devoted to religious studies.  After a failed attempt at law school, he resigned himself to theological studies at Princeton.  After a year, he became a licensed minister by the Third Presbytery of New York.[1] McDowall was involved with a number of organizations designed to combat prostitution, including the Magdalen Society and the New York Moral Reform Society.  He had an uncanny compassion for the prostitutes he preached to in the Five Points district.  Unlike many of his contemporaries, McDowall found fault with the men who patronized the brothels more than he did with the prostitutes who were providing the services.  In his book, Magdalen Facts, he questions the double standard that the majority of Nineteenth-Century New York placed on prostitutes.

“The character of the Magdalen is as good as the character of a seducer or debauchee.  Do not birds of like feathers, according to the proverb, flock together?  Will a man consent to associate with his inferiors?  Will he walk the street with an unchaste female hanging on his arms, or attending his steps as a companion, close at his side, when he considers her beneath him in the point of excellence?  Is he better than the company he keeps?  If a Magdalen is his associate, why is not a Magdalen as reputable as he is?  The truth of this remark is apparent to every mind, and no man will hazard his reputation for good sense by denying that a Magdalen is as good, or even better, than the unprincipled fellow who visits her, to gratify his carnal propensities.”[2]

These women, according to McDowall, were victims of men who had nothing to lose in this sexual exchange.  Society forgave them their lapses of judgment, and they remained respected despite their actions.   A woman who had fallen into prostitution had little recourse in which to better her life, or to bring herself back into “good” social standing.

An entry in McDowall’s diary recalls a conversation he had with a married man who frequented the Five Points.  The married man stated it was “justifiable to have, occasionally, a spree with the girls.”  When McDowall asked him how he would respond to his wife doing the same, he responded, “I would call her ———–.”  One can only imagine what word was used in place of that blank.  This prompted McDowall to pose the question, “But what shall this man be called?”  His thoughts about this exchange centered on the question “Is the wife not bound to be divorced from him?”[3] Given McDowall’s profession, and the era in which we are speaking, the fact he even mentions divorce as an option is evident of his underlying sentiments regarding sexual equality and propriety.

To further his reformation goals, McDowall started a self-titled journal in 1833.  Ultimately, this journal created more problems than solutions.  McDowall upset New York by publishing the names of brothels and prostitutes.  This led to “suspicious minds in the district attorney’s office [worrying] that his publication in effect served as a tour-guide to dens of iniquity.”[4] Furthermore, McDowall threatened “to expose publicly the names of men who frequented brothels and seduced innocent girls.”[5] He never published the list, but he frequently received disturbing letters regarding his threats.  McDowall published one of these letters in his Journal, along with the drawing that accompanied it (See Image).  This letter contained language so vulgar he refused to print it. 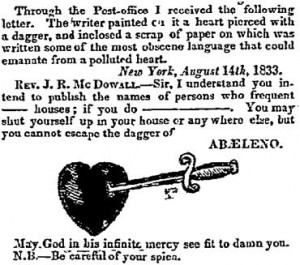 Many newspapers and concerned citizens referred to his publication as pornography.  By 1834, McDowall’s Journal ceased to be published after a grand jury declared it to be a “public nuisance, calculated to increase the very evil it professes to prevent, [by] inciting the young to the gratification of criminal passions.”[6] In addition, McDowall was removed of all ministerial rights by his Presbytery due to his “his notoriety, financial management, and unconventional approach to ministering to the unfortunate.”[7] McDowall died of tuberculosis at the age of thirty-five, in 1836, the same year the infamous prostitute, Helen Jewett, was murdered (click here for a blog on her story).  Although many viewed his actions as questionable in motive, McDowall was, in reality, a religious zealot truly intent on saving these sinners from a most undesirable fate.

[7]Hill, 20.  The reference to an issue with “financial management” regards the alleged wrongful appropriation of some funds given to one of the charitable organizations for which he worked.