A Saint's Just a Sinner Who Fell Down 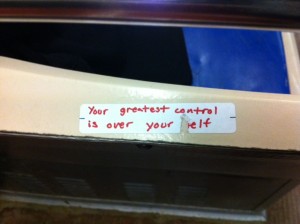 The title of this post comes from a track mixed in on The Can Can Sessions, a house mix spun over a decade ago in Chicago. The original song is a gospel song by Donnie McClurkin. I’d first hear this song back when I ate drugs and drank as much as possible under the pretense of having fun. I love that album, The Can Can Sessions. I loved a lot of those times. Most of them were fun.
So does partaking in illegal activities make me a sinner? Does it make me a sinner that I don’t feel remorse for enjoying some illegal activities? Does it make me a sinner for putting people who cared about me in a compromising position by fearing I would hurt myself? Maybe. I think it makes me more of a selfish jerk.
What constitutes a sinner? Which book written by humans should we choose as a guide to living today? How many times and to whom am I supposed to say sorry today?
Does it make me a sinner to think religion can be useful but is essentially a way to comfort ourselves regarding things that we, as humans, can not explain?
And who am I to judge someone who believes in those books? The only idea that we can seem to agree on is that we’re all right. And aren’t we? Who believes something that they know is wrong? (ironic believing aside)
All I know, which is very little, is that through experience, when I’m doing something that doesn’t feel right, I should stop doing it. Simple as that. This is not something I do very well all the time. Maybe that makes me a sinner. Maybe that I recognize it makes me a saint. Maybe by removing those labels I become free to live without such limitations on myself or fear of failing what I think I should be.
Judge lest ye be judged or whatever. Maybe we should line everyone up and go over their virtues and weaknesses, determining who is worthy of claiming goodness. But who gets to preside over this hearing? And ultimately, what would it accomplish?
Maybe kindness is what will save us. Maybe rather than focusing on what our fellow human beings are doing wrong, we may approach those hurting others with open arms and a helping manner, without attempting to change them because we think what they’re doing is wrong. Maybe they don’t see it as hurtful. Maybe they don’t know how to not hurt because that’s all they have experience with. Maybe they just don’t care.
Not really my business.
The other day on the subway I saw that someone had left a file label with “Your greatest control is over your self” on the back of a seat. What a nice reminder of how to conduct my day in a more productive way. I don’t know about anyone else, but I spend a whole lot of time trying to control things around me in an attempt to feel safe. And in the end, it leaves me out of focus. What seem to work is taking actions with intention. Many times, that means doing nothing.
Does that make me a saint? No. It merely makes me a little less of an asshole sometimes.
*Disclaimer: Emmy Em does not agree with Donnie McClurkin’s views on homosexuality, however, respect that Mr. McClurkin has every right to have his own opinion.

4 responses to “A Saint's Just a Sinner Who Fell Down”

Emmyem likes telling her husband what to do and being a clinical psychologist. When not therapizing, she stares at her son and cats. Sometimes she still dances and performs.