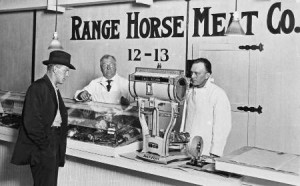 Image from Good.is
The horse:  a beautiful and majestic creature.  Historically, also a tasty one.  They were a major food source for our ancient ancestors.  Humans did not domesticate the horse to ride it, but rather to serve it for dinner.  Initially, humans hunted wild horses much as they would any type of game.  Some historians even indicate that the disappearance of wild horses from western Europe and the Americas is due to humans consumption.[1] Between the 6th and 4th millennium BCE, wild horses had mostly disappeared, causing a respite in the consumption of horsemeat.  The 4th millennium BCE saw an increase in consumption once again, possibly due to the beginnings of horse domestication.
Who ate horses?  Excavations in Slovakia, the Czech Republic, Austria, Germany, and Anatolia show evidence of horses as a food source.  In Dereivka in the Ukraine, archaeologists found six hearths containing bone fragments, 75 percent of which belonged to horses.[2] In Kazakhstan, the bones from one site dating from around 3500-3000 BCE were 99.9 percent horse.[3] Some evidence indicates that like other animals, certain parts of the horse were considered highly prized delicacies.  Remnants of horse skulls that have been cracked open indicate that the brains were removed and likely eaten.
In 732 CE, Pope Gregory III made horsemeat consumption forbidden, although it had long been a taboo in the Mediterranean and Near East.[4] However, many modern nations eat horsemeat.  In Italy, horsemeat salami and sausage is sold in many markets.  In Japan, raw horsemeat is served sashimi style.  Once value was found in working and riding horses, whether for farming or warfare, the consumption of horsemeat declined.  Historically, however, horsemeat was a necessary and desirable form of sustenance.
Our own culture views horsemeat consumption as a taboo, mainly because we tend not to eat our pets.  However, it is important to note that the U.S. has a history of horsemeat consumption as well.  During World War II, horsemeat was often used as an alternative to meat rations.  In Seattle, at Pike Place Market, there was a stall that sold horsemeat up until 1954.  In fact, up until 2007, a few equine slaughterhouses still existed in the U.S.[5]
Although many nations have banned, or desire to ban horsemeat, it is a cultural norm for many.  Unfortunately, modern notions of what is ethically edible naturally result in a loss in food culture.  Items that we may find disgusting, such as placenta and dog meat, are part of a longstanding food culture that we tend to overlook due to our own qualms about what is right and what is wrong.  As Andrew Zimmern says, “If it looks good, eat it.”