Have a Coke and a Smile

How often do you drink a Coca-cola or another Coke brand product? Not many people can answer, “never” to this question. Coke has been around over a hundred years (starting as just a syrup which still to this day is the secret ingredient), and restaurants around the world use the syrup and add carbonation in their fountain service. We all remember “New Coke.” It was almost a death sentence so they brought the original back quickly and called it “Coke Classic.”

This past week I was holed up inside a temporary bar shaped like a Coca-cola bottle at the Murray Brothers Celebrity Golf Tournament. I served celebs and drunks alike (with the Bill Murray probably being the most famous – of both.) The Coca-cola bar attracted famous musicians and sports althletes as well. They lined up for hard liquor but more often than not it was combined with a Coke mixer of some kind. (I have to give a quick shoutout to Keli Gjesdahl who endured many long shifts inside the bottle with me.) Coke sponsors just about anything that needs a sponsor from Nascar to the First Charlie Brown Christmas – from the Super Bowl to the Special Olympics – from charity golf tournaments to rock star concerts.

I’ve heard that people in other countries walk for up to four hours one way just for a case or two of Coke which they then take back and sell from their front porch – making Coke a part of their way of life. I started drinking Coke when I was only two or three years old, and where I come from, Coke is often substituted for formula or breast milk. (Those same families have a generator for electricity and they don’t wear shoes.)

In 1886 Coke debuted in Atlanta for 5 cents a glass by John Pemberton, a pharmacist. It was named by his bookkeeper, Frank Robinson. It was first produced the same year as workers were constructing the Statue of Liberty. In 1893 A.G. Candler started advertising Coke, and two years later, syrup plants started popping up in Chicago, Dallas, and Los Angeles. Let’s skip to later historical significance – In 1971, we had the famous “I’d Like to Buy the World a Coke” commercial. In 1978, the Coca-cola company was selected as the only company allowed to sell packaged cola drinks in China. Coke is enjoyed in over 200 countries worldwide and sells over 1.4 billion beverage servings every day.

Try this experiment – see how many days (or hours) pass without seeing a Coke logo or product. There are currently over 3,000 different products made by Coke including A&W Root Beer, Japanese Youki, Buzz Energy Drink, Vault, Dasani, and Tab. There are also more healthy choices like Fuze, Fresca, Hi-C Blast, and lots of Minute Maid juices (Minute Maid brand is owned by Coke). Coke also makes (owns) Nestea, Powerade and Schweppes. Better yet, try to do without these products for 48 hours. I honestly don’t know if I could do it. I drink at least 3 cokes a day (real Coke Classic) which explains why I am often bouncing off the walls.

So let’s all go out and get a nice cold Coke, pop it open, take a sip, and say “”Ahhhh! In fact, anytime you think of me, I give you permission to “Have a Coke and a smile.”

Filed under: Of Historical Significance by papimcgill
23 Comments »

23 responses to “Have a Coke and a Smile” 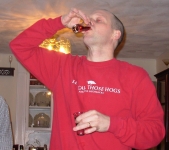 March 2010
You do not talk about Spite Club.
The Incapable Wrecked-Um
Have a Coke and a Smile
papimcgill
James Dean Is Still Your Love Slave (Sort Of)…
samaphore
selective memory: an Exercise in Fullness
llxtm
Be My Concubine
Stacy Parker Le Melle
Of Hysterical Significance
mattatonic
Of Protesting Significance
sn0tteh
Why not Her-story?
Tee
How to Destroy History in 3 Easy Steps
Jack Wild
Poopoo…poof! My virginity was gone.
Mr. Poopoopachu
"Everytime I turn around…I see the girl who turns my world around…"
rosie
A pig. In a cage. On antibiotics.
fent11111
Payday Came and With It a Beer
ecrussell
Pickle est vires quam mucro.
Benjamin Kail
of significance to no one but me
acbauch123
History? Let's Put it to a Vote!
Karen
I Believe in a Place Called Forgiveness
An
Billions and Billions of Stars
Will
Snowmageddon It
rcmjd2k
These times, they are a'changin..
labtechgoddess
History Lesson < 500 Words "Graveyards of Massachusetts"
Christina
Mr. Dickson
McKnight
Making History
emmyem7
Thanks(giving) for Nothing
jarock74
Love, Baseball, and History
The Plain Simple Tailor
Gone to Sheridan, Wyoming in My Mind
Kate
Crushing Infinity in the Palm of Our Hand
jasonleary
Two Evil Dudes
bb222
February 3, 2010
angelatav